'The Young and the Restless’ Lauralee Bell Celebrates Her Parents and Their Legacy - globaltv
Your browser is not fully supported. We do our best to optimize our websites to the most current web browsers. Please try another browser. ×
IN PARTNERSHIP WITH

As a kid breaking into the business, Lauralee Bell tried to distance herself from her family name — even though she was on their show The Young and the Restless! Now, she can’t stop singing the praises of soap opera legends William J. Bell and Lee Phillip Bell.

When The Daytime Emmy Awards invited Lauralee Bell (Cricket) to present ‘The Young and the Restless’ 45th Anniversary clip and honor her parents, she didn’t hesitate.

“I’m super proud of them,” she says. “When I go to the studio, people will say, ‘I’ve taken care of my family thanks to your parents.’ And when my mom comes to set, it’s so heartwarming to see people come up and thank her. I understand how many people they’ve touched.”

RELATED:  Find Out Which Y&R Stars Took Home An Emmy At The 2018 Daytime Emmys

And it goes way beyond the cast and crew, obviously. Not only did the Bells bring joy to soap fans across the globe with Y&R and The Bold and the Beautiful, but the late Mr. Bell brought his vision to several other dramas and Mrs. Bell was a household name in Chicago thanks to The Lee Phillip Show.

“They were very much a tag team,” Bell recalls. “I applaud my mom, because she had this live TV show every single day, but she’d get us in the car with my dad or on the bus to school and then be on this massive race. She’d go get her hair and make-up done at Saks Fifth Avenue, get to the studio, get dressed, get her notes together, interview people and then be home before us. Sometimes she’d have three guests to prepare for and it’d be an author of a 500-page book, the cast of Star Wars — ‘Oh my god, Princess Leia and Luke were on your show!’ in addition to even more guests. My dad would help her out when she would get overwhelmed, he’d read half the book or offer, ‘Let me reformulate these questions so they’re easier for you remember.”

While he helped the missus prep for interviews with the likes of Ronald Reagan, Marilyn Monroe and The Rolling Stones, she tapped in to help with Y&R’s issue-driven storylines. “My dad would be stuck on a storyline and knew my mom had done a special on child abuse or rape or whatever hot button social issue came up in the storyline,” Bell explains. “So he’d ask for her input and utilized her expertise and experience. They were an incredible team!” 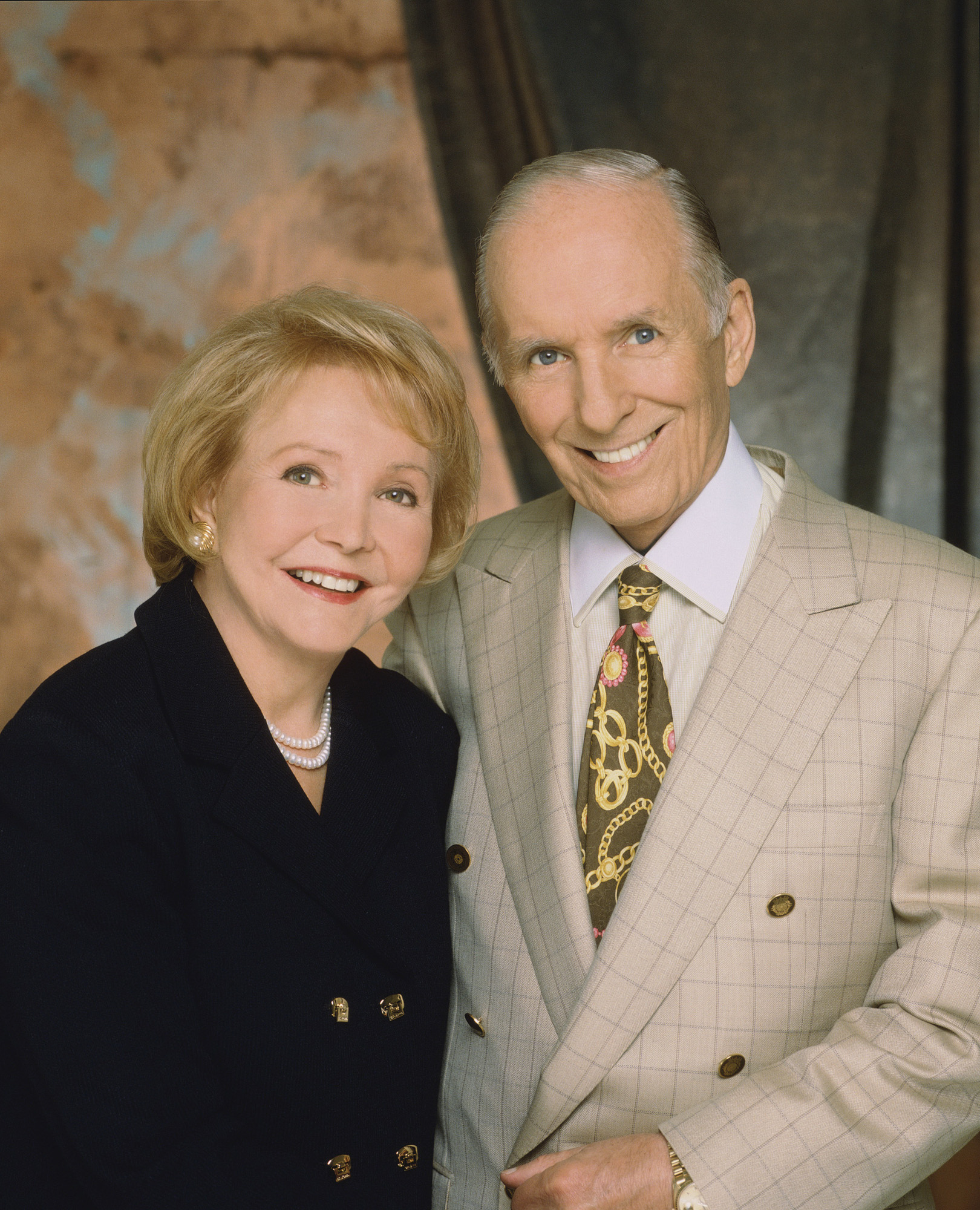 As many know, the Bell kids followed their parents into the business, which meant the family eventually moved to Los Angeles and Mrs. Bell left the spotlight behind. While Bill Bell Jr. now helms Bell-Phillips Television Productions, Bradley Bell runs their parents’ show B&B, and Lauralee Bell, of course, grew up in front of Y&R fans’ eyes.

“When I came out LA, I would try to get introduced to cast members without them knowing my last name, because I wanted to be treated normally,” she admits. “Now, I say it with such pride. My name may have gotten me in, but I earned my spot here after that.”

In fact, her parents resisted her interest in acting, at first, and even after she worked with a coach, her father wasn’t convinced. Cricket was only supposed to last 2 days! “But as soon as it was me, Thom Bierdz (Phillip) and Tricia Cast (Nina) together, he saw the impact of people saying, ‘Gosh, it’s not 25-year-olds playing teenagers — it’s actual young people and that’s so great,’” she recalls. “He got caught up in people’s excitement about that… and then he got caught up in it himself!” RELATED: 11 Amazing Facts About Doug Davidson That Might Surprise You

Having first appeared on the show 35 years ago as a passenger next to David Hasselhoff’s Snapper, Bell is always game to spend time in Genoa City with costar Doug Davidson (Paul). The actress in her wouldn’t mind a layered, dishy story and recently had a blast starring in the thriller “Mistress Hunter”, but the producer in her also has other irons in the fire.

“I’m in the space where I’m just as happy creating as I am acting,” says the working mom. “Whatever the day brings, I sort of switch hats. There are a couple things I’m developing and trying hard to push forward, including something that has a huge international element to it. People assume I’m just like Cricket. I couldn’t be anything further from my character, so I gravitate to sarcasm and comedy, but right now, I’m actually working on dramas. And it’s so hard! People think it’s easier now, because there’s so many places to pitch to, but there’s also so much being pitched to all these places. So we’ll see what happens in the next couple months. 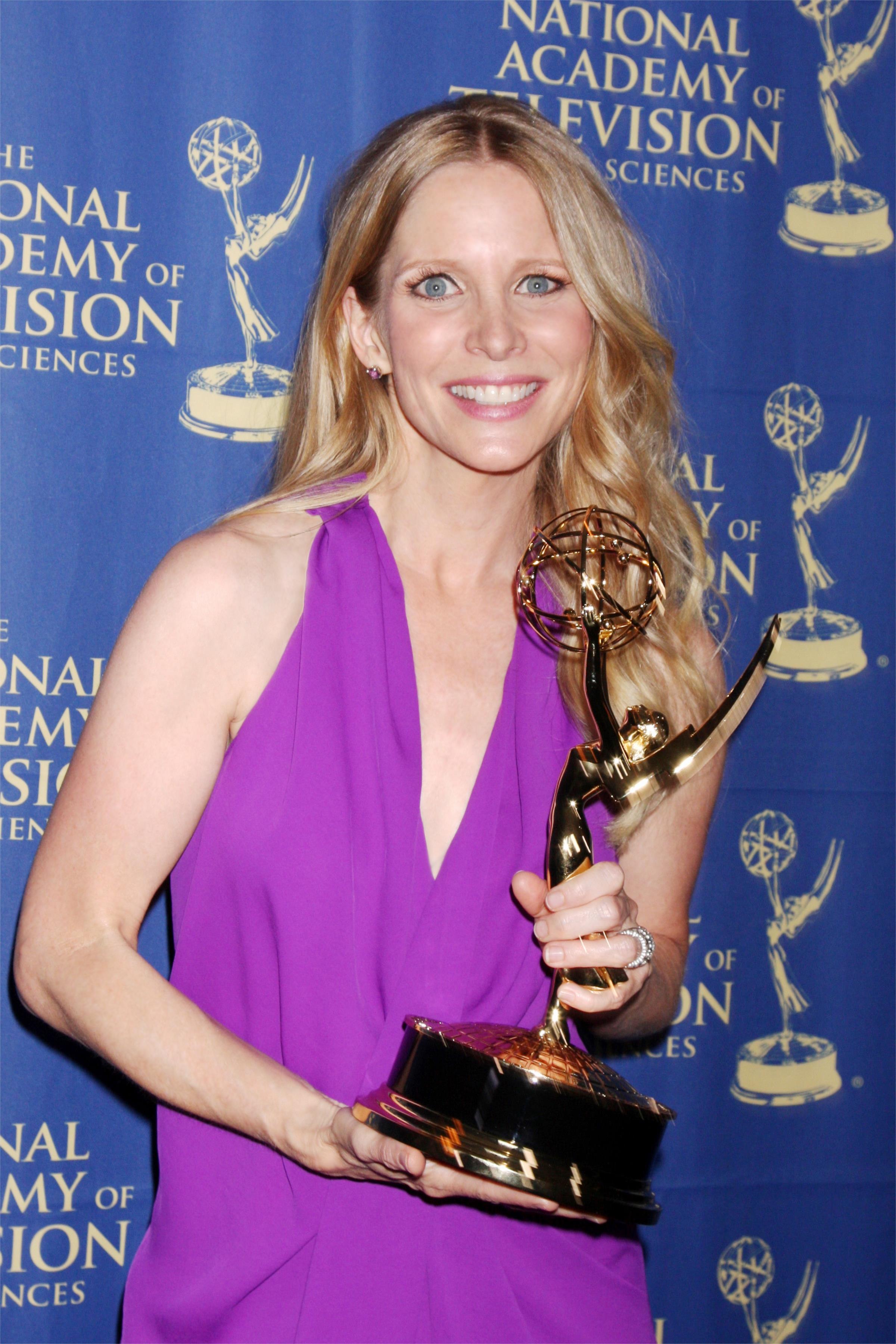 “How lucky am I?” she continues. “I’ve been able to witness what works and what doesn’t work. When I was younger, I would pretend to be sick and stay home from school so I could sit with my dad and listen in on his conference calls with the Y&R production office and the writers. I’d hear what he liked and didn’t like about scenes. It’s so clear to me how the show was based on strong characters and I learned how building the characters and their interactions with each other is everything. My dad knew how to give viewers a taste, draw them in… and then make them wait for it! Because that’s life. Things aren’t as simple as, ‘They love each other, so they’re getting married Friday.’”

She first saw her father’s strength when Cricket shifted from her first love Danny to what would become a lifelong love story with Paul. “Cricket and Danny were like a rock and roll fairytale, so when Michael Damian decided to leave, we were like, ‘How we going to sway fans over?’” she recalls. “I was terrified! But after the amazing five months of slowly taking the audience on this journey, everyone switched over and it felt like a huge accomplishment for Doug and me, but obviously it all stemmed from the writing.” Decades later, Bell still sees her father in Genoa City’s legacy characters. “I remember him outlining scenes for Victor and Nikki and going into Eric Braeden’s voice, ‘Nikki daaarling…’” she pans with a laugh. “Today, you can just stand any two of those characters in a room without saying anything for minutes and longtime fans will know exactly what they’re thinking, because we know these people so well. It’s pretty clear my father really understood the formula of great characters!”

After talking with Bell, it’s no surprise she was practically beaming when she took the stage at this year’s Daytime Emmys with Brad Bell and then her costars to celebrate Y&R’s 45th anniversary. “It went by so fast, but it was great,” she gushes of her moment on stage. “I had no idea there’d be so many cast members, so that was very special. And I truly believe my father was with us and he was happy my brother and I were up there together.”

With William J. Bell and Lee Phillip Bell’s shows still going strong, the next generation doesn’t seem very interested in the family biz… but Bell isn’t counting out the kids. “Brad didn’t really get into it until after the middle of college, so there’s still hope,” she winks.

Keep up with Lauralee Bell and the family dynasty by following @LauraleeB4real on Twitter.

Watch Lauralee’s Emmy Reel below for some Y&R nostalgia: