Mishael Morgan Talks Y&R Drama, Eye Surgery and Living Her Dream! - globaltv
Your browser is not fully supported. We do our best to optimize our websites to the most current web browsers. Please try another browser. ×
IN PARTNERSHIP WITH

The Young & The Restless’ Mishael Morgan is thrilled to be playing big family drama as Amanda Sinclair – a.k.a. Hilary Curtis’ twin. Having been taken out of the game due to emergency eye surgery in March, the actress dishes getting back into bed with Bryton James’ Devon, into the ring with Eric Braeden’s Victor Newman and hopefully, into the courtroom soon!

Long before Morgan joined Y&R to create volatile Hilary Curtis in 2013, she was up on all the Genoa City drama. “My earliest memory was crying because I wanted to put on Sesame Street and my mom wanted – needed! –  to watch Y&R,” explains the Trinidadian-Canadian actress. “It was in the background of my entire childhood and my teen years, I got into it myself. So I’ve been watching since I was five, which is crazy!”

That’s why Morgan – who’d already make her mark on the Canadian teen series’ The Best Years and Family Biz and done her share of guest gigs when she landed on Y&R – confesses her early days in Genoa City tested her in an unexpected way.

“I’d never had that experience of being starstruck – then I met Eric Braeden,” she cries. “And Kristoff St. John (Neil), too! But Eric really got me. I couldn’t talk. My eyes were starting to water. I didn’t know what was happening to my body.”

That newcomer energy served Morgan well in creating her first, more volatile character. “With Hilary, I really leaned into the fact that I was still unsure of what I was doing,” she explains. “If I had a scene with Eric, there were going to be nerves and I would use that – and Hilary would try to overcome those nerves in ridiculous ways!”

Cut to today, however, and the actress who once froze at meeting “TGVN” (The Great Victor Newman) has graduated to being a fan favorite who’s laid to rest a beloved character and introduced her more grounded, secret twin. Thanks to the big adoption reveal and Amanda’s expanding family, Morgan now finds herself welcoming wide-eyed newcomers to the fold!

“I’ve been so honored by this story and to meet the amazing people they’ve cast as Amanda’s mother, grandfather and sister,” Morgan raves of Ptosha Storey (Naya), Jack Landron (Sutton) and Leigh-Ann Rose (Imani), respectively. “This genre is not easy for any actor to come in and just nail it. When I came in, Kristoff, Christel Khalil (Lily) and Bryton James (Devon) were so open, respectful and patient. Kristoff walked on set and just took you under his wing. I’ve tried to be that for every person they’ve brought in for my storyline. But it feels a little crazy!”

She adds that after Hilary’s desperate machinations, she almost missed what was coming for Amanda. “It was funny, because when the family story was building, I was more concerned with, ‘Am I going to be with Nate? Or Billy? or Devon?’” Morgan recalls. “With my history on the show, it was weird for me to even to adjust to the fact that THIS is my storyline!

“But then I leaned into it, and it’s allowed me to get deep into Amanda’s psyche and define her, as a character,” Morgan adds. “And I think it’s beautiful for the world to see that sometimes, no matter how much time has passed, blood is so thick that you can’t deny it. The bond will always be there.” 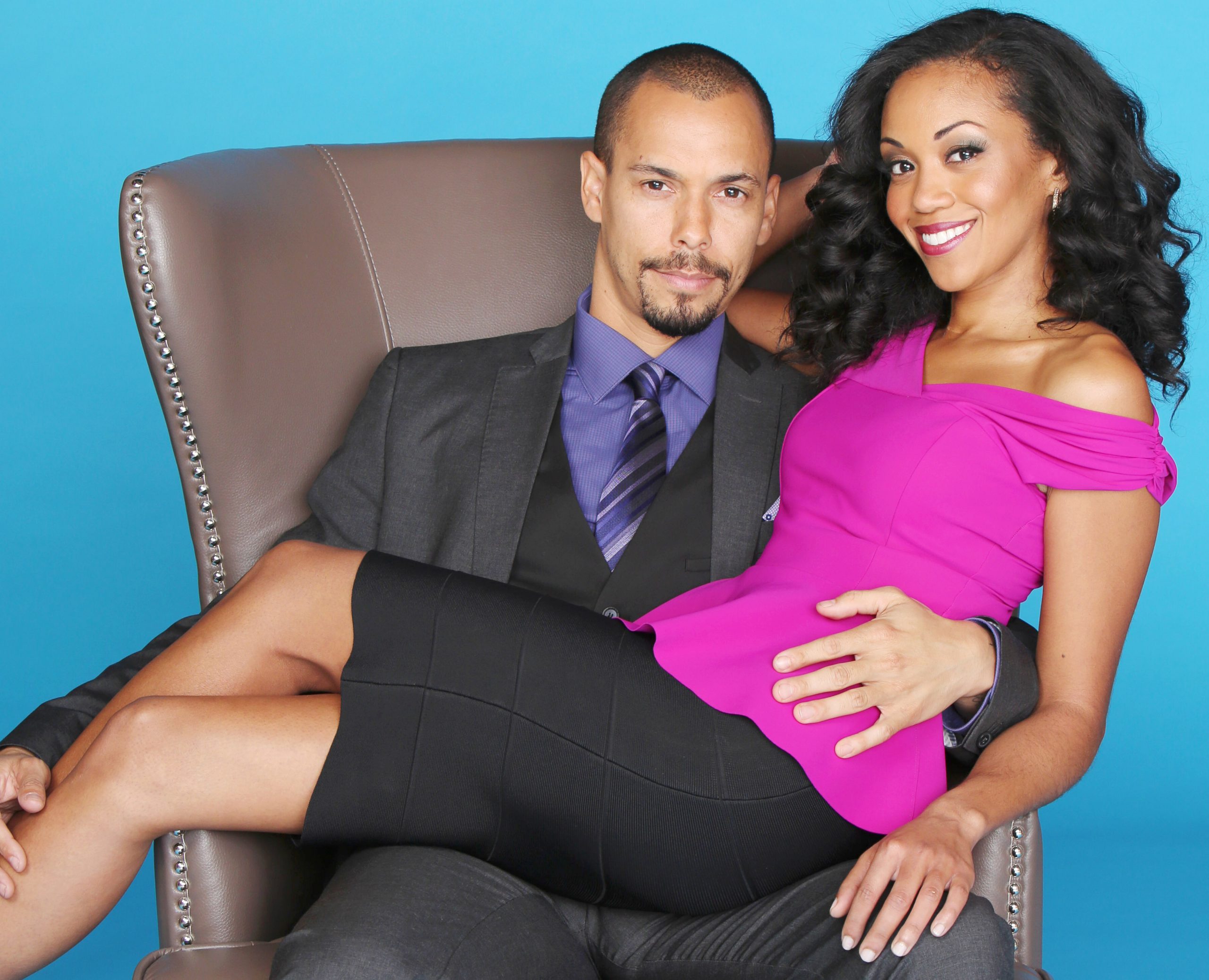 Last year, as Morgan was warming up to her new character, the Covid-19 Pandemic brought production — and the world – to a halt. Thankfully, she and her costars were back onset and adjusting to safety protocols only four months later.

“I was so lucky to be one of the few people working during quarantine,” acknowledges Morgan, who dug into building her new character, while also creating a new dynamic with Devon.

Thanks to the fandemonium over former supercouple “Hevon,” however, Amanda wasn’t just in the ring with Brytni Sarpy’s Elena – she was competing with Morgan’s own former character! “It was strange,” she confesses. “But Bryton and I have faith in our abilities, so it was fun to figure it out together. If fans really see a stark difference between Amanda and Hilary, but they’re also still excited to see Bryton and I on-screen together, that’s gold!”

Then in March, as Amanda began dipping her toes into a new mystery surrounding her biological father, Morgan was stopped in her tracks again – this time, because she was rushed to surgery for a detached retina. With The Bold & The Beautiful’s Karla Mosley stepping in to play Amanda, the procedure itself didn’t take long… but Morgan’s recovery was another story.

“I thought ‘isolation’ was the four months I was off work last year, when we had to be stuck in our house and were scared of the pandemic,” she says. “But then I got confined to a chair! For seven days, I had to be face-down in order for my retina to heal properly. I got a ten-minute break every hour, so I was always looking for my 10 minutes! Yeah, that was a new level of confinement.”

Morgan was cleared to return to work in April. “I was like, ‘Can I even remember lines anymore after being stuck in this chair for so long?’” she admits. “I worried my eye was red or watery. It took me out of the scene a couple times, but as soon as I refocused my energy and started doing what I love to do, I totally forgot about it.”

Disorder in the Court

These days, Morgan is looking forward to digging into this murder mystery – especially as it should ultimately push Amanda into the courtroom!

“My first dream was to become an international human rights attorney, because I wanted to fight for women’s rights and justice all around the world,” reveals the actress who dropped out of law school just two weeks before classes started, but is still fighting the good fight in her own way.

“I’m a storyteller, and the stories that were told to me transformed me,” she explains. “They touched my soul and changed who I was, from the inside out. I realized that as an actor in front of the camera or behind the camera, I can change the world at lightning speed just by creating and telling stories.”

All that said, Morgan can’t wait to finally get into the courtroom – via Amanda, of course. “It’s my dream to be like, ‘I object!’” she grins. “I have to say that one time in my life… and I think it’s coming.”

Morgan is also excited that her Genoa City drama has her sharing the stage with the man who once left her speechless. “I love working with Eric Braeden,” she gushes. “He is very unpredictable. He’ll throw a little line in there and it forces you, as an actor, to stay present. It’s exciting to work with somebody who’s constantly keeping you on your toes!”

As for the romance with Devon, Morgan is happy to be back in the thick of it with James, but she insists self-assured Amanda isn’t concerned with the competition. “She’s so focused on her family, this case and all this other crazy stuff that she doesn’t have time for other women or additional drama in her life,” Morgan sniffs. “I don’t think she’s thinking about Elena… at least not right now!”

You can keep up with Morgan by following @mishaelmorgan on Instagram.

Also, click on the link below to view Morgan’s “I Have a Dream Project,” featuring various actors reciting a poem by Maya Angelou. Morgan produced and directed this very special piece: