'The Late Show With Stephen Colbert' Begins Russia Week - globaltv
Your browser is not fully supported. We do our best to optimize our websites to the most current web browsers. Please try another browser. ×
IN PARTNERSHIP WITH

July 17th marks the beginning of Russia Week on The Late Show with Stephen Colbert!

Fans of The Late Show have been anticipating footage from his trip to Russia for weeks. News of his “top-secret” trip first broke from Colbert himself, in a reply to a tweet from President Donald Trump. 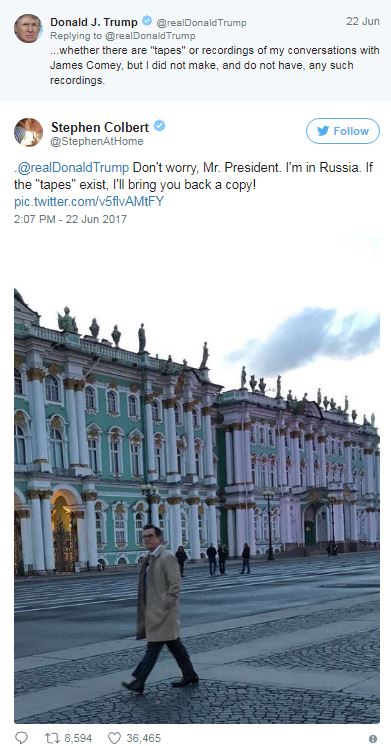 The tweet had people buzzing about what exactly Colbert was doing in Russia and what kind of footage he would reveal on his show. To add to the anticipation, his trip came at a time when Colbert was catching heat from an enraged monologue where he said some shocking comments about Russian President Vladamir Putin. The monologue ultimately led to an investigation by the Federal Communications Commission. Also, let’s not forget that President Donald Trump was knee-deep in a feud with former FBI Director James Comey, who testified against him in an ongoing investigation into Trump’s Russian ties. After weeks of editing, the footage is finally ready and will be broadcast throughout the week of July 17th to July 21st. Here are the guests who will be joining Colbert in the coming days.

Colbert brings the jokes, but the Russians certainly weren’t joking around with him. There was plenty of surveillance to keep an eye on what the late night talk show host was up to.

After his trip, Colbert released this mysterious teaser on his show…

Watch the Russia Week special on The Late Show with Stephen Colbert weeknights at 11:35 ET/PT!
ADVERTISEMENT