John Oliver Gets Giddy On The Late Show - globaltv
Your browser is not fully supported. We do our best to optimize our websites to the most current web browsers. Please try another browser. ×
IN PARTNERSHIP WITH

John Oliver returns to The Late Show to chat with his pal Stephen Colbert – and you can watch them egg each other on like some kind of machine of perpetual and increasing comedy.

John Oliver has been a guest on The Late Show with Stephen Colbert 14 times. Fourteen! That’s at least twice a year. And how many times has Colbert been a guest on Last Week Tonight? Zero. Now, it’s not that kind of talk show, but still.

But, despite having gotten together so many times on The Late Show, they haven’t been in the same room in over two years! The last segment they did together in person had them both sticking their heads in the same small box, at the same time. What we’ve learned since, is that we shouldn’t be doing that anymore, at least not right now. 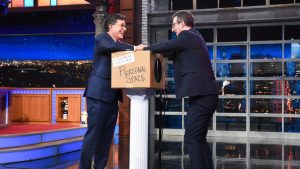 This is the box – even before COVID-19, this seemed like a bad idea.

Both Oliver’s and Colbert’s shows have resumed taping in front of a live audience over the past year – and Colbert pressed John Oliver about how he feels being back in the swing of it. His response? A squeak of an “Um”.

Moving on to the topic on everyone’s mind: explosives. Remember when John Oliver blew up a giant 2016 because of how lousy a year it was? He did, and it was pretty cool (the explosion, not the year – he was right to blow it up). And remember when he blew up an even bigger 2020, because that year was even worse? Well, 2021 was pretty bad too – objectively worse that 2016. But he didn’t blow it up – why? Stephen gets to the bottom of this mystery – and John Oliver shares his awesome action-hero story about blowing up giant letters as a symbolic middle-finger to the universe.

“The art of conversation in these shows is what I love about them.” Coming from most guests on The Late Show, that might be a nice sentiment. Coming from John Oliver, you know it’s as sarcastic as possible. It’s because he and Colbert are pretty tired and jaded from the exhausting near seven years of trying to find funny in cultural, economic and medical instability. The boys go from a banal question on how they abbreviate their respective shows to mimicking smothering someone with a pillow.


Maybe they need to take a season off…

Tune in to The Late Show with Stephen Colbert airing weeknights at 11.35 et/pt on Global, and watch the latest episodes and clips online here on GlobalTV.com or the Global TV App!