How 'Blacklist' Producers Pulled Off Animated Finale After COVID-19 Halts Production - globaltv
Your browser is not fully supported. We do our best to optimize our websites to the most current web browsers. Please try another browser. ×
Back
Posted By: Joty Gill
|

It is without a doubt that the COVID-19 global pandemic has had some serious implications on business big and small including many TV productions that came to a halt. The Blacklist was no exception, with an unfinished season the cast and crew had to find an alternative method to conclude the 7th season of the popular series. The result, a unique hybrid of live action and graphic novel-style animation.

With the finale around the corner, executive producers Jon Bokenkamp and John Eisendrath spoke to GlobalTV.com about the inception and execution of this creative solution when COVID-19 forced production to shut down earlier this year.

Q: Was there a particular strategy in combining the animation and live action?

Bokenkamp: We really needed to use all the footage that we had shot just because we didn’t have time to animate the whole episode. We knew we needed to use some of the footage that we had shot so what is animated and what is live action is really sort of arbitrary. There’s not a narrative device or reason for why we’re seeing parts of the show in animation and parts of the show live action. We address that right up front in the episode. We thought about it and we tried to come up with the reason and really the reason is there’s a global pandemic and we just couldn’t finish. There’s not a reason behind why we did it but we did in fact include some of  scenes that are live action that were not completely filmed. For example, maybe a phone call where we had shot one side of the phone call and not the other, where we went out and found some footage from previous episodes that we were able to cut into the light action. Even the live action footage you see was not all shot for this episode. So it’s a little bit of a mish mash of footage of four episodes 19 footage that was previously shot and animated footage. And luckily one of the things that we were fortunate about was that a few of the sequences that we had not shot were action sequences. For example, a helicopter sequence or a scene that was a heated conversation during a car racing through the city or shoot out in a motel. None of those have been shot so we were able to lean on the animators who are very good at doing action and asking them to to make it even more exciting. The action with the helicopter we never would have been able to do live action and same thing with the car chase that goes through the city. Typically, it would just been in the back of the car, three people talking on green screen. But the animators are quite good at opening it up and making the show look and feel bigger. That was a positive by product of  what we had shot.

Q: What are some obstacles you had to overcome?

Bokenkamp: I think the biggest obstacle was time. Typically the animators we worked with work on feature films that they will work on for months or a year doing pre-visualizations for big action movies like Avengers or Wonder Woman. So time is the one thing we did not have from this concept which made it more difficult. It was a learning curve for both sides. John and I and The Blacklist side of things knew nothing about animation and the animators weren’t terribly familiar with our show and so just  finding the look and feel of the show there were a lot of conversations about how do we make it look like The Blacklist? Do we use lots of close ups, do we have to be on their faces all the time or are there different objects moving through the frame. I think one of the obstacles was just trying to make a very quickly made animated version of the show, look and feel like the show. The animators did a really fantastic job, not only making it feel like the Blacklist but leaning in to the animated graphic novel version of the show even a little more difficult.

Bokenkamp: We did make small adjustments in episode 19 as it was never intended to be our our finale. When we weren’t going to be able to finish we thought we were going to have to end with episode 18 and and that would be that. But the 19th episode had story points that were a much better ending which is why we really wanted to finish it. We did make some adjustments so that it’s a little more of a cliffhanger and a little more of a throw forward into the eighth season. In terms of what we were planning, we had an ending for season seven that we were very excited about. Usually when we start the writer’s room in June, it’s sort of a blank page and and we’re not sure where we go and this year going into season eight we have some stuff that we’re very excited about that would be really really fun to sort of take those scripts apart and look at them again and try to figure out how we want to take what was scheduled to happen in the end of season seven and and let it be a great beginning to season eight.

Q: With the possibility that production will not continue in these unprecedented times, do you plan for Season 8 to include animation or will you find other ways to be innovative?

Eisendrath: It is true at this moment we don’t know when we will be able to film live action again in New York. We will be able to start the writer’s room virtually with the writers working from home and come up with the ideas and write the episodes for the eighth season that we can start doing soon. But we don’t know yet when we’ll be able to start in New York and even when we start we don’t know what the additional limitations will inevitably be. While the animated experience was great and I think that we would be possibly open to the idea of doing something like this or something different like this as part of the show in the future. I don’t think that it’s a substitute for the live action version of the show that people have come to know. As enjoyable as people will find looking at James Spader in animation I think generally they would prefer to look at James Spader in live action. 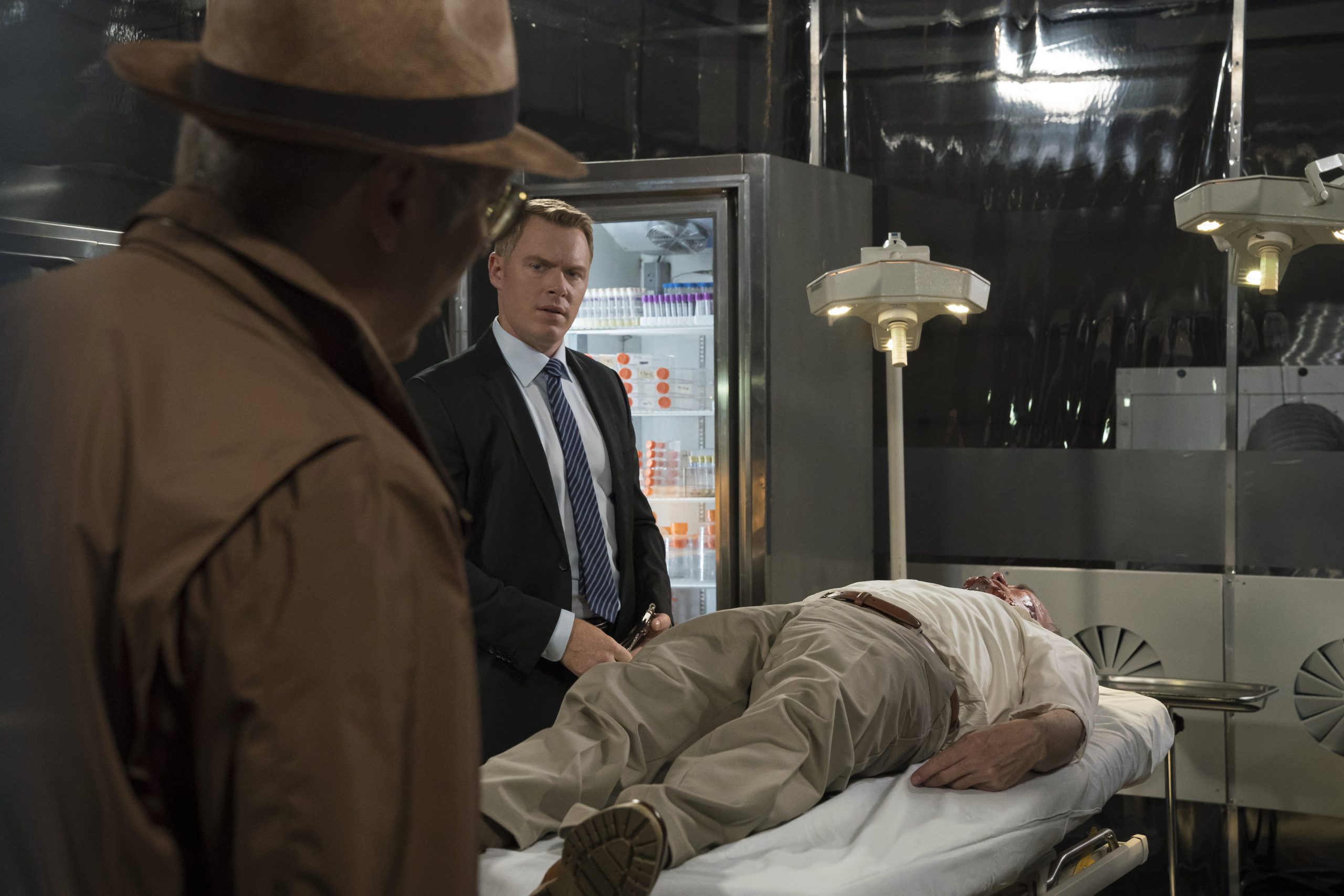 Q: What did you enjoy most about working on the animated version of the finale?

Eisendrath: We enjoyed everything about doing the animation. Jon and I didn’t know anything about animation before we did this. It was a great learning experience for us to understand how animation works. And it was incredibly exciting to both watch the animation get done and to realize how much freedom we had to make choices in the animated portions of the episode that we could never of made in the live action portions. For example, we had a scene where our characters Liz, Red and Dembe were just sitting and talking in a room in the original scene of the episode as it was written, but when we realized that was a scene that was going to be animated we realized we don’t have to have them just sitting in a room talking. We could have them walking on the Washington Mall with the US Capitol looming over them with something that we could never do in live action because we film in New York and not in Washington. It’s always impossible and takes so much time to do things like that in live action. So that was incredibly freeing and very exciting. We took advantage of that as much as we could in the process of animating the episode.

The Blacklist can be streamed live and On Demand on the new Global TV App and on STACKTV. Global is also available through all major TV service providers.