Survivor's Justine Fills In The Blanks - globaltv
Your browser is not fully supported. We do our best to optimize our websites to the most current web browsers. Please try another browser. ×
IN PARTNERSHIP WITH

With only so much time per episode Survivor whittles down days and hours into minutes every week. Sometimes we as viewers don’t see all that happens on the island. Such was the case with Justine Brennan’s boot last night. There was far more to the story. For example..Why did Justine vote for Cody and her partner in the game Noelle voted for Nneka? Justine took the time to explain it all to GlobalTV.com.

“So there’s a lot of confusion around that and because they (the viewers) didn’t show what happened going into tribal. Dwight and Jesse had a plan. Obviously, Dwight didn’t have a vote but were all locked in together or so we thought. We were so convinced that we could trust Jesse. We thought Nneka knew she was going home. In preparation for tribal, knowing Nneka was on the chopping block and probably playing her Shot in the Dark, we also wanted to cast votes on Cody in case Nneka plays her shot in the dark and is successful. That’s why we split the votes,” Justine clarified.

Justine wants to also set the record straight about something else: Everyone was afraid of the spiders in the Fijian jungle. Everyone.

“Of course in edit they only show me being afraid of spiders! Everyone else out there is also…Oh my God! There’s a spider right there! Oh my God! I just walked into a spider’s web! But of course, to keep up with my storyline they have to only show me freaking out about the spiders,” she laughed.

The centerpiece of last night’s episode was Cody’s wild and wacky hat ruse. By unleashing the Beware Advantage Cody would lose his vote at tribal council if he wasn’t able to convince every tribe member to give him a specific bead attached to their Survivor bag. Cody was able to do so by making the tribe believe he was wearing a hat he made of palm fronds to tribal council and needed beads to decorate it. Since it was kooky Cody nobody questioned the method to his madness not even Justine…and why would she?

“It was just so expected of Cody in the moment! He’s such a character out there! He’s exactly how he is on-screen as he is in person. For him to make a hat and then want to decorate it, we didn’t think anything of it. For me, I’m just like…Yeah, go ahead….It was a shock to hear that they were actually up to something by doing that but I honestly applaud them because it was genius!” she said. 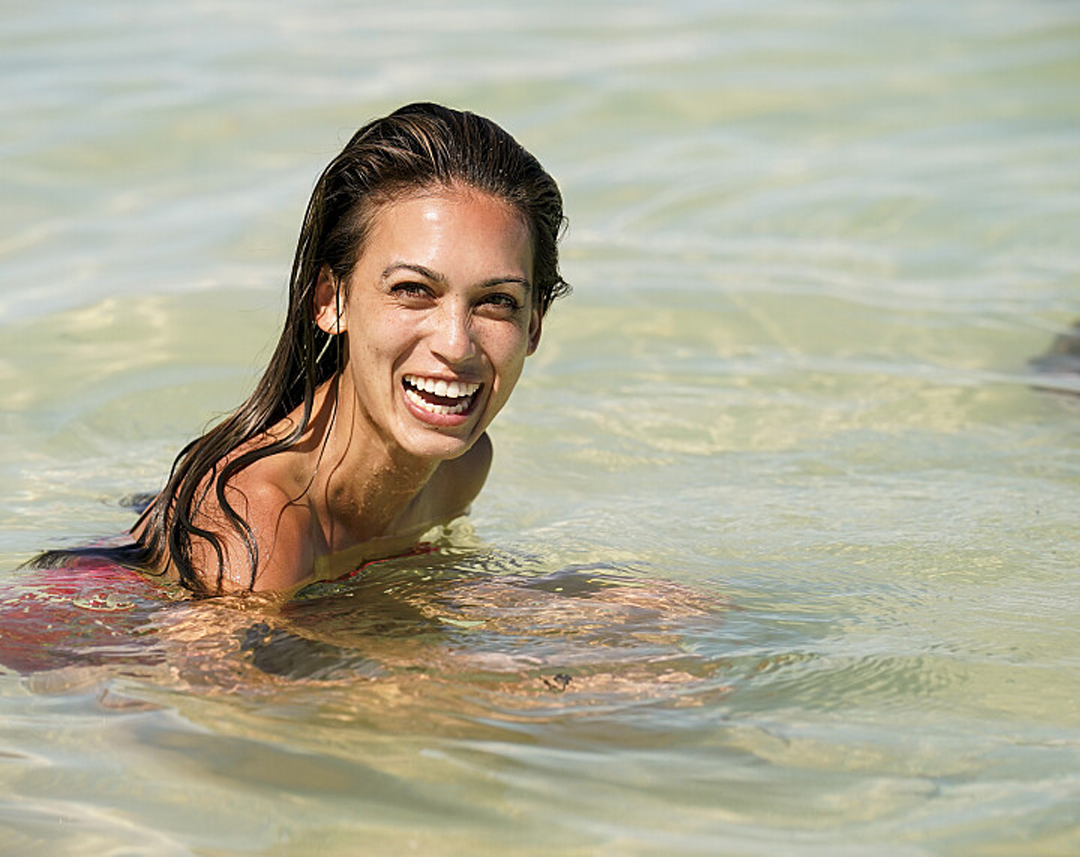 What also surprised Justine was Jesse’s feelings about her as a person and a player. Jesse expressed his mistrust of Justine when she told him that she is a good liar and how she checked in with him before the tribal council vote. Justine, Dwight and Noel even wanted to include Jesse in their alliance even though Jesse was playing the middle.

“We were all in a circle of trust together and we wanted to pull Jesse in. Jesse is an endearing person in real life. He’s on the quieter side. You hear about a story and you just like are kind of like…Wow, I can’t believe you like you grew up in that…I was able to connect with him a little bit so it did sting to hear him say that I that he jibed with me the least out of everyone else,” she said.

A life-long Survivor fan who used to watch the show with her family Justine knew what she was in for when she signed up to play in the temperamental Fijian jungle. What stunned her about herself though was how strong she really was.

“What really, really surprised me is how much your body is capable of because even two days into being out there. in our first Immunity Challenge…we were only 48 hours in and even that early, I was like…I am starved! I feel really weak right now I might pass out on national television! I was thinking that literally the seconds leading up to Jeff saying…Survivors ready! As soon as he said ‘Go!’ and we started the challenge there’s so much adrenaline running through your body that you completely forget about being hungry. You completely forget about not sleeping. That all goes out the window and you’re just in it. It was shocking to me to just be able to go from like feeling weak and hungry to just feeling I’m on top of the world right now,” she said.

Although she would play again in a heartbeat and is grateful for the lifelong friends she made on the show Justine admits that she was a bit out of her comfort zone seeing herself on national television and fans on social media dissecting everything about her, her game in such granular detail.

“It’s more of just a sigh of relief. I think because I’m such a private person seeing myself on the TV and having people talking about me on Twitter or Reddit is hugely foreign to me. It is kind of nice that I’m not going to be part of the narrative going forward,” she laughed.

Catch up on Survivor episodes here.