Survivor's Dwight on why he was a target and what happened with Jeanine - globaltv
Your browser is not fully supported. We do our best to optimize our websites to the most current web browsers. Please try another browser. ×
IN PARTNERSHIP WITH

“Cody called me the strategist all the time even though we never really talked strategy. It was kind of frustrating to be labeled immediately,” said Dwight revealing that during his raid visit to Coco, Cody told them Dwight was the premiere strategist at Vesi.

“That’s why I wasn’t surprised to catch all Coco’s votes. I couldn’t control my first impression at the tribe raid. I was just very unfortunate for my game long-term. Cody did a good job of neutering my game. That’s a very clever move on his part. I’m not upset about that. He did a good job of painting me as a massive target,” he explained further.

Cody wasn’t the only Vesi tribemate working against Dwight. He found out the hard way that when you have allies like he did you don’t need any enemies. The fractures at Vesi became more pronounced once the tribes merged. His former ally Jesse turned against him striking far earlier than Dwight ever thought he would. Dwight believed one of the deciding factors for Jesse was that he was closer to Noelle than Jesse ever was. 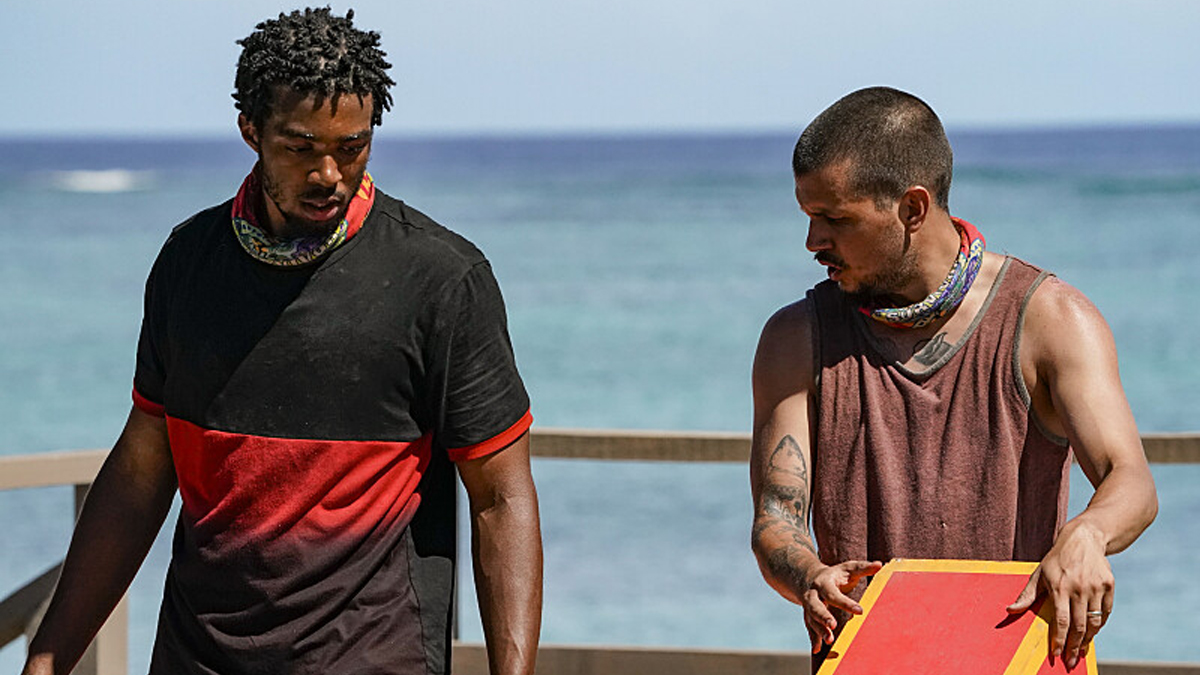 “I was aware he’s playing the game hard and that he might come to me at some point…I really trusted him. I kind of bounced all my ideas off of him. I think what he realized was that I was closer to Noelle and for him I guess that was a problem. I respect his decision because that’s a good read…I was aware that he had a close bond with Cody than I ever would but I was like…You know what? As long as I trust Jesse and Jesse is controlling Cody, I’ll be fine…I kind of gave my allies a bit too much leeway. You have relationships that you’re building? As long as you’re using it for my benefit I’m cool, right? I think I should not have had so much grace with people,” he sighed.

Once he was at tribal council and his game was on the line Dwight tried to let Jeanine know that Sami had flipped on their plan to get out James and others had as well. Dwight was called out by host/producer Jeff Probst for whispering at tribal council so he stopped strategizing fearing that things would become ‘live’ and the people who were on his side might turn against him. Dwight thought about playing Jeanine’s idol but believed if he did, not only would she be mad at him but their allies would be as well, especially if he didn’t need to play it at all. He assumed he wouldn’t be able to recover from such a breach of trust and didn’t want to come off like he was playing to make it one more week, which was jury.

“I hate people who only play for jury. I was playing to win. Making a short-term plan to make jury that’s b——t and I’m not going to do that and that’s why I did what I did, to be completely honest,” he said.

Besides why Dwight was considered a threat what also confused some viewers about last night’s episode was whether or not Jeanine was asking for her idol back at tribal council. Dwight says that isn’t what happened.

“She was checking in on me just make sure I was doing fine…She had a lot more trust in me than I did at that point. She was just consoling me and making sure I was doing okay. Maybe my patience got the best of me. I was like..’I trust you here. I’m not going to like play the idol. I am not going to panic and blow things up.’ Maybe I should have blown things up,” he laughed.

Dwight wanted to be composed and careful player. He wasn’t on the island to make flashy moves for “good television”. He was there to play a smart and perceptive game.

“I was there to win a million dollars. If you look at the past few winners they played a pretty consistent game. They struck at the right time and that’s why I tried to wait until I felt like it was the right time to make a move. Unfortunately, they all thought it was the right time to make a move against me at that point! (laughs) I could always say I should have made a move earlier but if I did maybe I would go home the next day for being the strategist who made a move. It’s a balance. At some point you have to just realize the cards aren’t in your favor,” he said.

Looking back, what Dwight wishes the producers had shown was his close relationship with Ryan, especially how they really bonded before the last tribal council.

“What they didn’t touch on at all was how I felt about Ryan on that last day. That’s the only time I cried within the game. It was to Ryan. An hour or two before tribal I really didn’t want him being a target and I don’t think he wanted me to be a target but it was just the way that things were going that day. I felt super bad about it. I literally saw him and I just teared up. He could tell my energy was off and started talking to me as a person. That meant a lot to me. It wasn’t a game plan at that point. It was just a human and a human. That’s something I appreciate and I kind of wish it made the show. He was there for me in that moment,” he said.