Survivor's Parvati Shallow on Living on the Edge; Sandra Diaz-Twine's Exit
Your browser is not fully supported. We do our best to optimize our websites to the most current web browsers. Please try another browser. ×
IN PARTNERSHIP WITH

For Survivor: Micronesia – Fans vs. Favorites winner and Survivor: Heroes vs. Villains finalist Parvati Shallow, her journey on Survivor: Winners at War was a very deeply personal one. Leaving her 10-month-old daughter behind and then living on the Edge of Extinction for approximately 20 days took a toll on her spirit. Having to look deep within herself to push past those obstacles inspired her to write a children’s book when she arrived back home.

With the finale looming on the horizon, Parvati spoke to globaltv.com about her latest Survivor experience.

The finale of Survivor: Winners at War airs on Global next Wednesday, May 13th at 8:00 PM.

John Powell: The last episode ended on a cliffhanger so we don’t know who will win their way back into the game. What was your mindset heading out to the all-or-nothing challenge?

Parvati Shallow: “That this was everything I had been suffering for and preparing for! The whole reason I was there boiled down to that one moment! So…no pressure.” (Laughs)

John Powell: We saw bit and pieces of how horrendous life was on the Edge of Extinction. How truly bad was it?

Parvati Shallow: “It was actually worse then what viewers saw. You only saw a couple of minutes an episode of what life was like on the Edge. For us, it was 24 hours a day for weeks and weeks on end.”

“For me, the biggest challenge going into that experience was keeping my mind positive and staying mentally strong. All the work that I have been doing to become a professional life coach helped me to create that mindset for myself no matter what was going on outside of myself. I really relied on that. You saw me doing yoga and meditation. That was a constant daily practice. Every morning, I would invite people to come and do yoga with me. If not, I would just do it by myself. Having that kind of ritual to help keep me connected to my spirit and a positive mindset really supported me though that experience.”

“It was the most extreme experience I have ever had on Survivor simply because the people I was surrounded by had lost their spirits, except for a few. It was destitute in many ways. There was nothing to look forward to. It was like Groundhog Day every day. (Laughs) The saving graces for me were yoga and…peanut butter.” (Laughs) 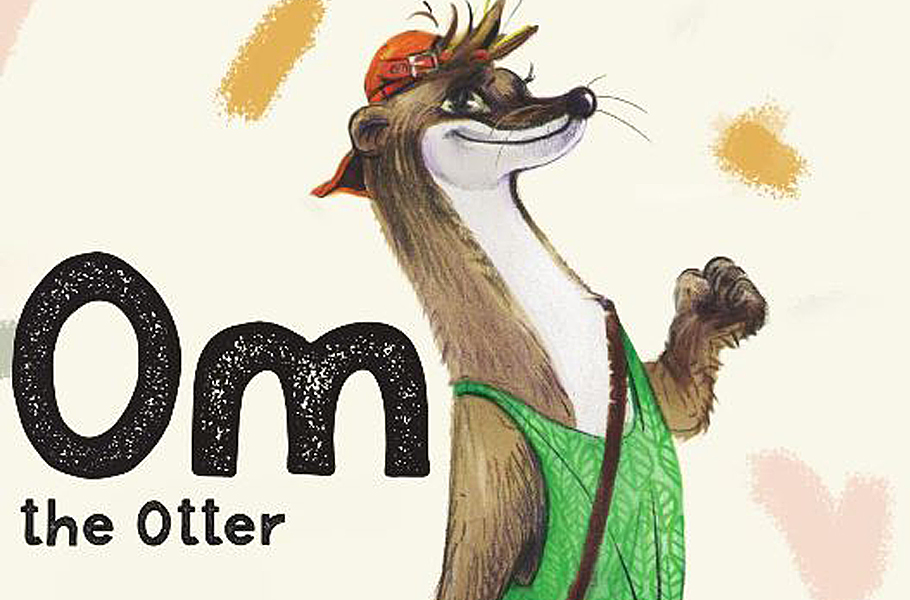 John Powell: Speaking of your outside ventures like being a life coach, tell us a bit about the children’s book you wrote: Om, the Otter.

Parvati Shallow: “When I came back from Survivor I was really inspired to write a children’s book that was about connecting to your heart so I created a character called Om, the Otter. It was inspired by all of my experiences on Survivor but especially the mindset I needed to make it through the Edge and sharing a moment of peace with my own child because she is two and she doesn’t stop moving, ever. (Laughs) I wanted to offer her that after my experience of being on Survivor.” 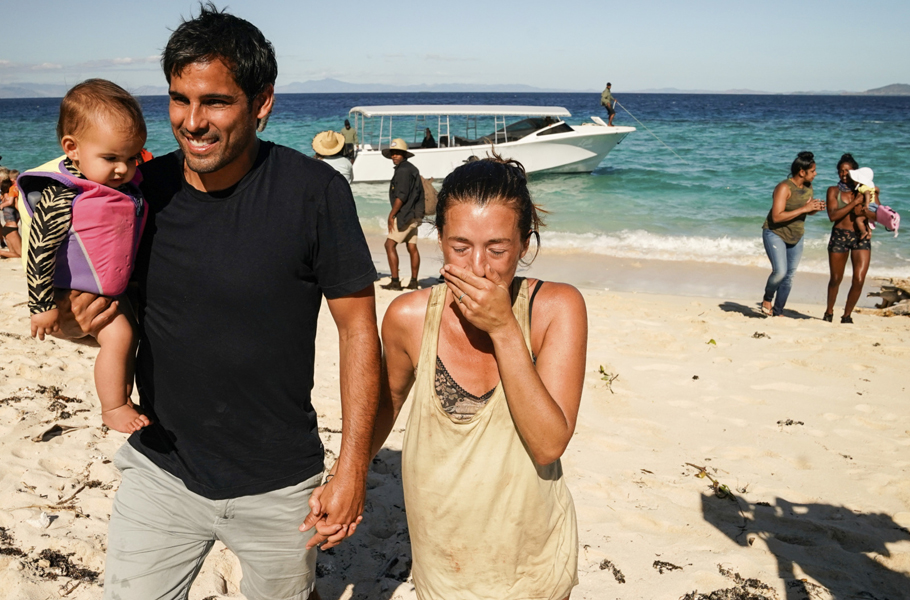 John Powell: You are a veteran player. We have seen you play before. This time was very different though. You are a wife and a mom as well as a cutthroat competitor. How did being away from your family affect your Survivor experience and gameplay and how did the family visit lift your spirits?

Parvati Shallow: “The hardest thing in the world was having to leave my 10-month-old daughter and go out and play Survivor. To put myself in that game mindset was completely different than what I was doing at the time as a loving, nurturing and open-hearted mom to a little baby. It was a jarring separation to have to leave. Once I left it was really abrupt. There was no contact with my family. No face-timing with my daughter. I was in an arena, warrior-style.”

“On the Edge, I couldn’t believe my family was actually there. We are on the Edge! We are the rejects who are given scraps. Why were we being given this amazing gift of being able to see our families? It was amazing and so emotional! It was so surreal to have my 10-month-old daughter come to me in that environment! You are right though. It did re-energize me for the rest of the time that we had left. I was recommitted in that moment as I remembered what I was doing there. It was a huge decision for me to leave my baby to come and play so I wanted to win.”

John Powell: Having won the game, gotten to the final tribal council twice, you are one of the best players to ever play the game. You were a massive threat in Winners at War. Why in the world did the others not target you sooner?

Parvati Shallow: (Laughs) “It was pretty hilarious! Boston Rob and I were like…What’s going on? Do these people not know who we are? (Laughs) I came in with the mindset that I would have a huge target on my back and knowing I was able to dodge that before and make it to the end twice so I knew I had what it took to navigate the pressure of being a big target.” 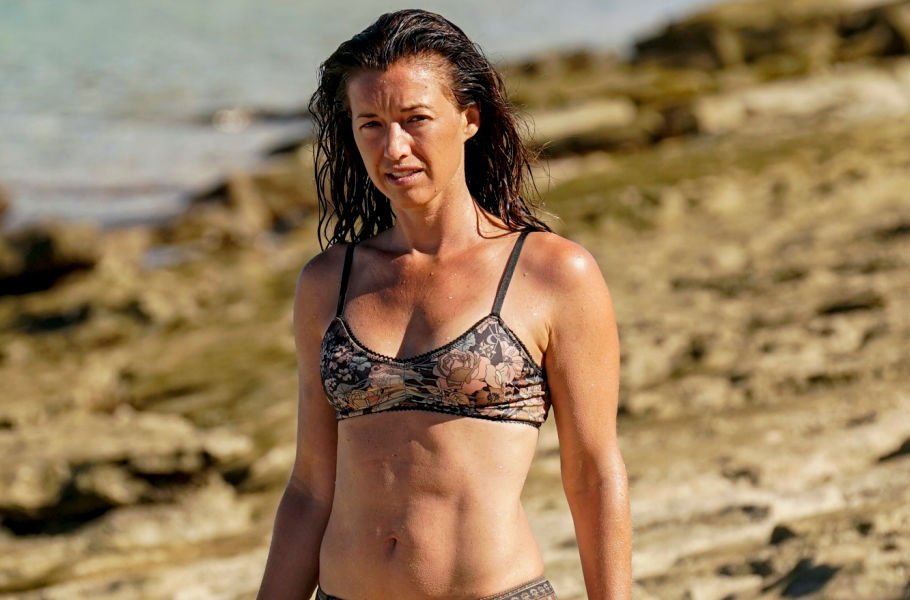 “I immediately hit the beach working multiple social angles and doing my best to integrate myself into the various factions. Rob was doing the same but from another angle. Rob and I were doing a choreographed dance. I was working on the ladies. He was working on the guys. We would get back together and make a decision. We were wondering how long we could do that without people getting wise.”

John Powell: I am not sure whether I buy into this notion as I don’t see too much of a difference but there has been a theme of “Old School” versus “New School” this season. As someone who has been out there and played the game, explain to me what the difference is, if any?

Parvati Shallow: “The biggest difference to me was the Old School players played with a lot more loyalty. We will fiercely protect each other. I mean, when people were bringing up my name, Ethan and Rob were like…No. No. No. They were sticking their necks out to protect me. I didn’t see that with the New School players. I mean, we saw how things worked out between Jeremy and Wendell. Jeremy was willing to let Wendell go because he didn’t want to stick his neck out too far for him and be seen as someone who was trying to keep someone around. I think that is more the New School way to play. Hey, if they are trying to take out my Number One, I will just find a new Number One. I have never played that way. I play with people I can trust and we have complimentary skill sets. I would have loved to have gone further with Rob and Ethan because we were so different. Ethan was making relationships with very different people; Rob was making relationships with very different people, than I was. The loyalty and trust I felt with those guys was real. I knew that they would not go against me.”

John Powell: How did you feel when Sandra joined Edge of Extinction and then immediately quit the game?

Parvati Shallow: “I was shocked…and then I wasn’t. Sandra had sat out every challenge. She even had a bench named after her. (Laughs) I had just arrived on Extinction and Sandra is ready to pull the flag already? She only lasted like five minutes there. That surprised me because I was like…Oh, wow. She just really wanted to come in and make the two million and be gone and if that isn’t happening for her, she is not willing to do anything else. It was surprising…and then really not. Sandra is Sandra. She is very upfront and unapologetic about only playing for the money. That is all she is there for.” 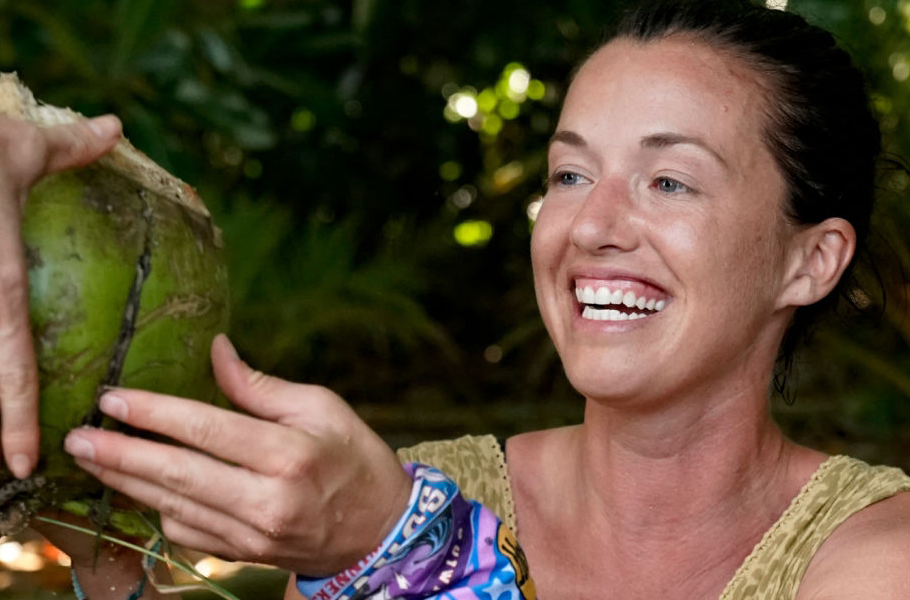 John Powell: Let’s say you don’t win the battle back challenge and become a part of the jury. What are the traits you are looking for in a winner?

Parvati Shallow: “I am always looking for someone who played with the fullness of their entire being. I want someone who played with so much heart, with a ton of courage, took huge risks, took themselves out of their comfort zone in order to get to the end and then at the same time, it has to be someone who considered all of the aspects of the game including their relationships with the people on the jury. I am less concerned with a resume of big moves. I am more interested in someone who played with every fiber of their being, mind and spirit to win this game. Did they fight as hard as they could? What did they overcome to be in that position?”

John Powell: “You have been able to sit at home and watch all of the episodes. What surprised you the most and was there anything you wish they had included in your edit?

Parvati Shallow: “The biggest surprise to me was that I heard Sandra tell the story about how she got blindsided but I didn’t believe her then I watched it and couldn’t believe it! She really thought she has things sewn up. When I watched the whole thing go down with Denise I was impressed with how she put herself out there to take out Sandra. I enjoyed that moment because it was so out of nowhere.”

“With my edit, I am just surprised they didn’t show me crying all the time. I was like asking the producers ‘Are you guys only going to show me crying?’ They were like…’Don’t worry about it’. (Laughs) I was really surprised but it was really emotional for the first couple of weeks and after that I kinda of got it together but the experience really took a toll and had a huge impact on me leaving my daughter and having that vulnerability. I have never been that emotional on Survivor before so it was a very different experience and I surprised myself with how emotional I was at the beginning of the game.”