Owen talks Survivor frustrations - globaltv
Your browser is not fully supported. We do our best to optimize our websites to the most current web browsers. Please try another browser. ×
IN PARTNERSHIP WITH

Even though during the final phase of the game Owen Knight became a challenge beast he was continually playing from underneath. Without being able to lead a lot of those big moves because he didn’t have the numbers or the influence Owen had to rely on his social game and challenge wins to propel him into the final three.

John Powell: You must really be proud of the game that you played.

Owen Knight: I’m proud to have made it to the end. I certainly wish more things had gone my way and I was able to have more currency in the game but making it all the way to the end, I am proud of that.

John Powell: Did you get any answers or indication from the jury about why you didn’t get any votes at the final tribal? I was surprised by that.

Owen Knight: You and me both, dude. That was a bummer. I didn’t think I was going to win. Let me just make that very clear but getting no votes? That hurt a bit. I’ve talked to a couple of the jurors since and the general consensus was I didn’t have a “winning resume”. I hate the “Survivor resume” as a concept but in terms of the boxes available for me to check there were just less of them. I didn’t have the strategic dominance and my hand wasn’t necessarily steering a lot of the strategy of the season so there just wasn’t as much available for me to take credit for. I think I did the best I could do with what I had. 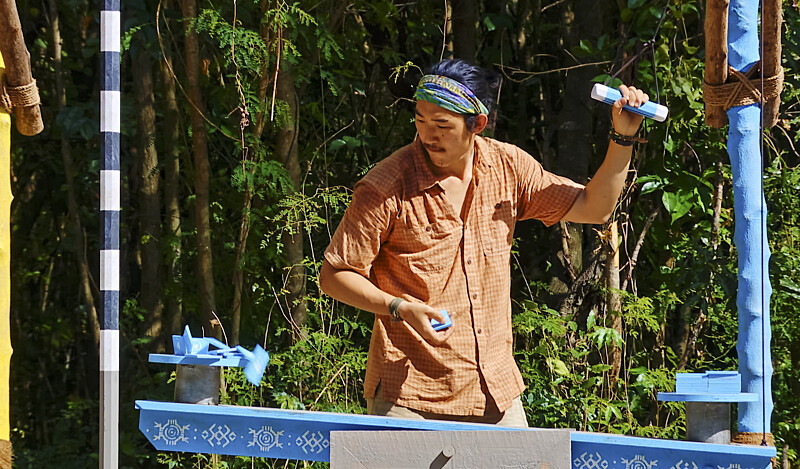 John Powell: I think part of it was you were playing from the bottom. When you have to play from the bottom, your choices are limited. Is that how you felt during a lot of the game?

Owen Knight: Yes, I did feel that way. I think my my goose was cooked when Baka imploded at the merge. I’ve tried to avoid saying that it was the ‘hand I was dealt’ or I got ‘bad cards’ or whatever but it was my own choices that got me where I was. I chose to stay with Elie, someone I felt close to since day one. I chose to work with Dwight, who made me feel like a valued alliance member who could communicate strategy back and forth opposed to the Coco alliance who felt like they were telling me what to do. I don’t feel like I was put into a bad position. I don’t think like anyone was out to get me but it was just really unfortunate that those decisions ended up me facing this uphill battle. It was very frustrating. I felt like many days the only concern I could work with was staying alive. I didn’t have the luxury to try to cook up a billion different plans or really try to be super creative strategically because I just had to get to tomorrow.

John Powell: Do you think Cassidy not picking you for fire hurt your game?

Owen Knight: Not really. I think the main thing that sealed my fate was not winning the final four immunity challenge. I knew going into that challenge I would need to win and send Gabler and Cassidy to the final three and deal with Jesse myself during fire-making. I knew that was the only chance I had to win. I wasn’t even sure that that would give me the win but I knew for me to have the best shot at winning I would need to pull a Chris Underwood and take out the biggest threat.

John Powell: I’ve been a gamer my whole life. If you looked at my room when I was younger you’d probably see little black marks on the wall where I throw a controller here and there. I’ve gotten over that. (laughs) We saw a lot of things that went wrong for you. You really took all of those to heart. They really upset you. Explain to people what happened during those moments.

Owen Knight: It’s a game for a million dollars and I am not going to apologize for feeling very strongly but in those moments, I felt it was just it was so real. It was authentic. I’m not gonna sit there and pretend like ‘Oh, good job, guys! What a blindside!’. No, I was pissed! So, I spiked my bag on the ground. I’m way too cheap to ever throw controller against the wall. (laughs) It was very frustrating. The roller coaster analogy I gave in the episode last night, just the ups and downs and Noelle’s vote in particular I felt like I finally got a little footing. I was able to work and pull off this move against James and shake up the structure a little bit and take a shot at the power alliance. Then the next night for her to go home in the way she did and me left out once again it was just defeating. I hope people can empathize and understand where I was coming from. I think most people are viewing it as relatable more than that I’m a total psychopath. (laughs)

John Powell: I wanted to ask you about “player paralysis”. Did you feel that if anyone made a big move they were targeted early on?

Owen Knight: It was really extremely frustrating. It was just like feeling like I was running into a brick wall after brick wall. Jeanine and I were putting in a lot of work trying to flip the power structure on its head, trying to get Cassidy and Karla to come over to our side. I really wanted to work with all the women in the game and we saw that very unique trend of our pre-merge being made up mostly of women.

John Powell: As far the game goes you pulled off some great challenge wins. Did you surprise yourself?

Owen Knight: I hoped that maybe I could do well but to be tied for the lead of the most wins in the season with Cassidy? I did not expect that going in. You know, I’m not the biggest guy. I’m only like 5’10 and there were some really athletic people on our cast. I am definitely most proud of the Last Gasp. That was a challenge that I thought I could perform well in since I first saw it like growing up doing swim team in the summers and thinking about being able to hold my breath and try it. I wanted to try that challenge for over a decade. It was really incredible to get to do it and to shatter the record.