Noelle: ‘I was sick of playing a quiet game’ - globaltv
Your browser is not fully supported. We do our best to optimize our websites to the most current web browsers. Please try another browser. ×
IN PARTNERSHIP WITH

Back in 2020, Paralympian Noelle Lambert told the Lowell Sun: “My accident was the best thing that ever happened to me.”

Those who aren’t aware of her multitude of athletic accomplishments, how she rose above the tragic accident that took away her left leg may find that statement confusing but those who have followed her career, knew her well or have watched her inspirational journey on Survivor, they understand it completely.

“I absolutely think that my accident was the best thing that’s ever happened to me. Before my accident, I was that type of athlete and that type of person that just went through the motions in life. I felt like I was entitled and things should just be handed to me. I’d never really understood what hard work was,” she admitted.

Noelle confessed that mindset also extended to her athletic endeavors.

“Even being an athlete I never went above and beyond the classroom. So, having something like that happen to me it just made me realize what was important and made me work harder for things. It made me appreciate the hard work it takes to get to a place and when it finally pays off, that feeling is incredible! It made me mature very, very quickly…You should always go into something and doing the best that you can, always applying yourself,” she said. 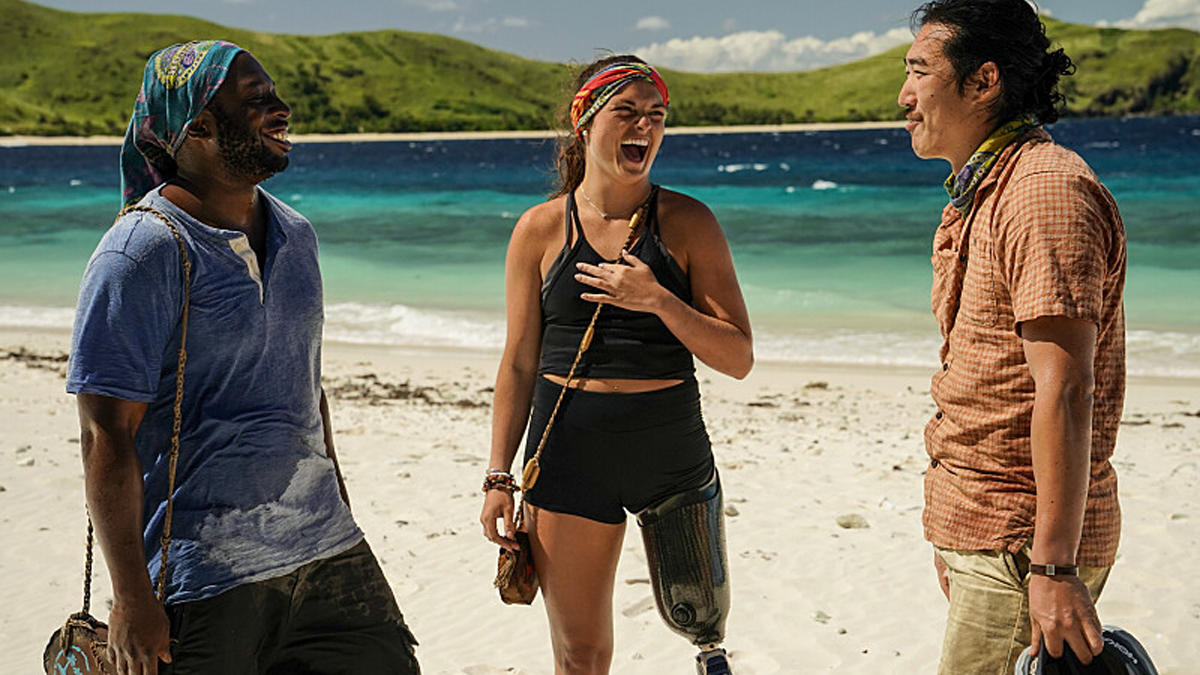 Noelle’s indomitable will and perseverance saw her finish eighth this season. Funnily enough, fellow amputee Survivor: Vanuatu’s Chad Crittenden also finished eighth during his season. Chad lost his leg due to a rare form of cancer.

Since the merge Noelle had stepped up her game being more aggressive about taking out her targets and spearheading strategic conversations. That plan of attack has led to the downfall of many players this season. In our interview with Jeanine she revealed that ‘player paralysis’, castaways unwilling to make big moves because of the blow-back they would receive, played a big part in this season’s gameplay. Noelle agreed. She called it the “theme” of this season and one of the reasons she was voted off the island and sent to the jury.

“If you did anything too big, anything too loud, you were on everybody’s list to go home. You had to adjust how everybody else was playing and everybody else was playing in a very quiet way but it doesn’t mean that’s a bad way to play. It means they’re doing it in a really smart way where people can’t really see that they’re playing a great game… So, I 100 percent agree with what Jeanine said because I definitely stuck my neck out. I was sick of playing a quiet game. I was also I wasn’t in the majority at all. I was never in the seven. I was like: I’m sick of this. Why can’t I just get rid of people from the seven and maybe that will make people want to work with me? I was trying to do it in a loud but trustworthy way,” she said. 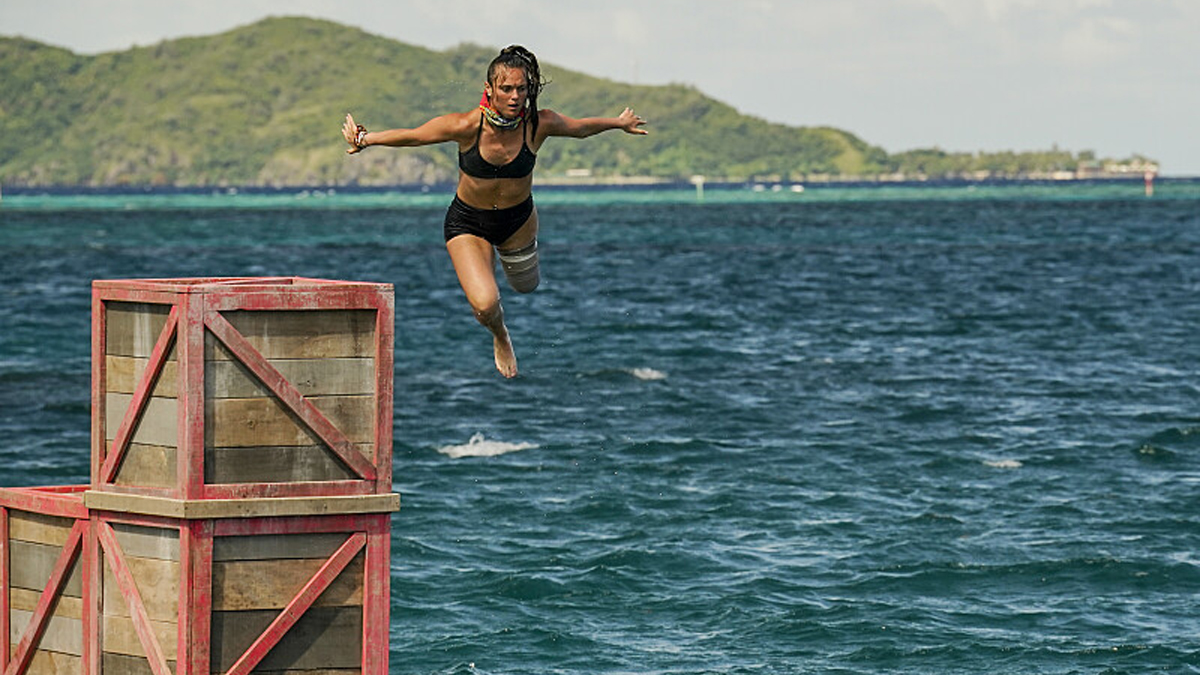 Despite the fact that Jesse and Cody betrayed Noelle several times she continued to march forward with them. Noelle admits she shared everything with Jesse and was even willing to give him her advantage if he was in any danger. Noelle believes putting so much trust in Jesse was her biggest mistake and resulted in her downfall.

“I literally would just trust everything that Jessie would say. Yes, if he told me to jump off a bridge I would have jumped off a bridge. It just goes to show you that he was playing the game and in a really great way because he could put his feelings aside,” she said of her Vesi ally.

Noelle thinks Cody and Jesse have been such a strong power couple because of the way they manage and manipulate their allies.

Noelle was no stranger to pulling the wool over the other castaways’ eyes either though. While on the island she followed her mother’s advice and wasn’t truthful about her achievements.

“I actually lied to everybody. I didn’t tell them I was a Paralympian. I said I was a lacrosse coach and I that was just part of my strategy. I just didn’t want to get all that attention on me and my story. I was trying to just be quiet about it. I would tell people how I lost my leg and everything but I just never would be this is my life and this is what I do. Especially watching the show, all these professional athletes, they always lie. My mom is the biggest die-hard Survivor fan as well. So, that was my mom coaching me,” laughed the professional athlete, Paralympian, motivational speaker and the head of her own foundation.

Noelle’s foundation is The Born to Run Foundation. The foundation provides specialized prosthetics to young adults and children. Their goal is to “show amputees that having a disability does not mean they are incapable of playing sports and being active, and to show them that being different is something to embrace.” Not only has the Foundation made a difference in many people’s lives but it has given Noelle the chance to tell her story and inspire others to follow in her footsteps.

“If you want a specialized leg, which means like if you want a running blade or if you want a waterproof leg or snowboarding leg, those are not covered by insurance and you’re basically kind of all on your own with paying for it. They can range anywhere from $10,000 to $30,000 USD. I personally received three different specialized prosthetics donated to me from foundations. Seeing the work that they do for other people, that really inspired me and it really made me think. I’ve received all this incredible support and I want to give back so that’s what we do. We’ve been able to donate 21 or 22 different specialized prosthetics. It’s been it’s been incredible. I want to be that mentor and that positive light for people. In my situation, I got to meet a lot of the Boston Marathon survivors from the Boston Marathon bombing, all these Paralympians and people who have basically taken me under their wings. I knew I needed to give back. Luckily, I have an amazing family. My mom is a superhero and helps me run the foundation…It’s an incredible feeling!” she said smiling.

Since appearing on Survivor, Noelle has received all sorts of positive messages from fans and former Survivors who have been touched by her story and her determination, tenacity. That alone has made being voted off, having to relive that moment, easier to deal with.

“It’s been it’s been incredible and so amazing, especially these last few days! It really has made me getting voted off a lot easier because I’m getting all these amazing messages from so many people! It just makes you feel great! I have touched people’s lives and that’s what I wanted to do from the beginning. I wanted to go into this game creating a positive light for the amputee community, for the disabled community. I wanted to help people who are disabled, who are going through difficult times, to show them that they can do anything because for me it was me seeing other people who were disabled, going to the Paralympics and do all these amazing things that inspired me. I wanted to return the favor,” she said.