Watch Chadwick Boseman Reprise T'Challa on SNL - globaltv
Your browser is not fully supported. We do our best to optimize our websites to the most current web browsers. Please try another browser. ×
IN PARTNERSHIP WITH

It was a very Black Panther-y Saturday Night Live when Chadwick Boseman, T’Challa himself, hosted this weekend.

It was a Trumped-up cold open again, with Alec Baldwin contorting his mug into his famous wrinkled Trump hole. The sketch covered most of the Trump hot topics over the past few weeks – specifically his love affair with Stormy Daniels and his love affair with Vladimir Putin.

But Chadwick Boseman shined through this week, specifically in a large number of Black Panther themed sketches. Of course, it was a topic in his monologue, but he actually became T’Challa in the recurring Black Jeopardy sketch.

It definitely worth noting that Boseman had no breaking points during this episode – he was as straight-faced as he needed to be during even the silliest of times. The Black Panther star carried the episode well – it would be a treat to have him host again.

The second Black Panther sketch of the night had some twerps appropriating the “Wakanda Forever” salute after having just seen Black Panther, while remaining ignorant about why they should just… just leave it be.

There was also a fine moment when Boseman played R. Kelly in a disturbing Disney Princess sketch in which Leslie Jones is shown through a magic mirror that her Disney Princess is… R. Kelly (though, that may be appropriate – since Disney owns Marvel, that technically would make T’Challa a Disney Prince…). And he’s being a real creep. 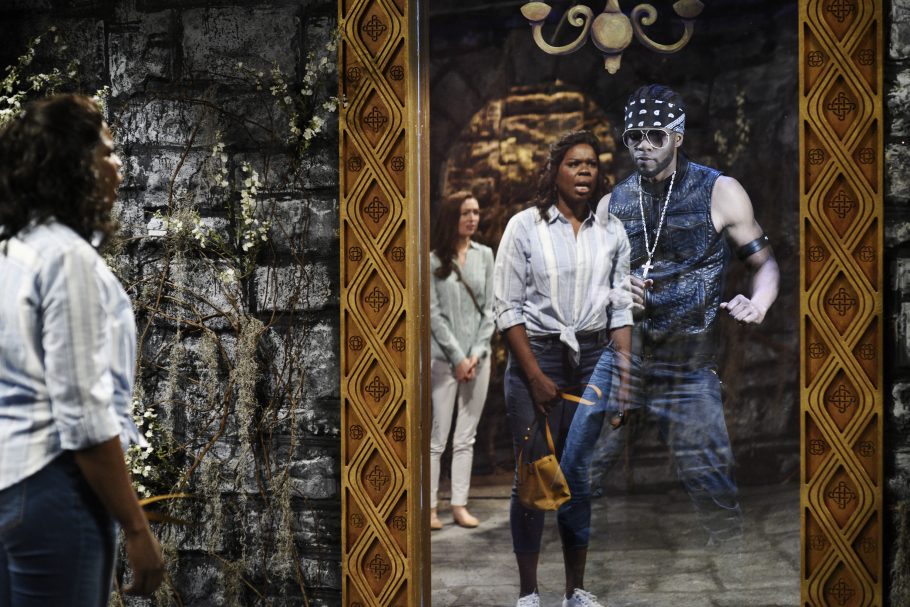 It turns out Boseman is the kind of host that SNL needs a bit more of. There’s been a good variety so far this season, from stand-ups, to Oscar nominees, to sketch comedians, to former cast members, to athletes. Boseman fills the category of “Blockbuster mega-star”, which is something great to have around because most of those blockbuster films are saved for summer release, during SNL‘s off-season. Boseman is a recent, hot household name, and arguably the biggest film star to host this season. Which will bring in the fans and give SNL some good mega-star cred.