SNL: Liev Schreiber Congratulates America for Voting - globaltv
Your browser is not fully supported. We do our best to optimize our websites to the most current web browsers. Please try another browser. ×
IN PARTNERSHIP WITH

Liev Schreiber came out in full Ray Donovan force last night as this week’s host of Saturday Night Live. Admittedly not a funny-man, Schreiber gave his all to his sketches (even the recurring Paranormal Occurrence sketch where, yes, he broke just a little bit, but everybody breaks during those sketches when Kate McKinnon goes all out).

Lil Wayne and Future cameo in a pretape music video sketch about the dichotomy of hip hop artists hyper-masculine posturing and being an ally during the Time’s Up and Me Too movements. Fronted by Keenan Thompson and Chris Redd, it’s an endearing sketch that quite well mimics the atmosphere of popular music and combines it with the atmosphere of popular cultural movements. Oh, and Pete Davidson’s rap name in the video is “Uncle Butt”. That’s also amazing.

Speaking of Pete Davidson (it seems like someone’s always speaking of Pete Davidson these days…), he was in the news from last week’s episode when he delivered a few jokes at the expense of veteran and Republican congressman Dan Crenshaw – specifically, making fun of his eye patch, which he wears because he lost his eye in Afghanistan. It didn’t go over super well, and even cast mate Keenan Thompson spoke out against the joke. So, with Davidson being a good sport, he had Crenshaw on Weekend Update this week to apologize, and have Crenshaw deliver a few choice jokes (that were clearly penned by Davidson himself) at Davidson’s expense. It’s just like Pete Davidson to put the joke before all else. 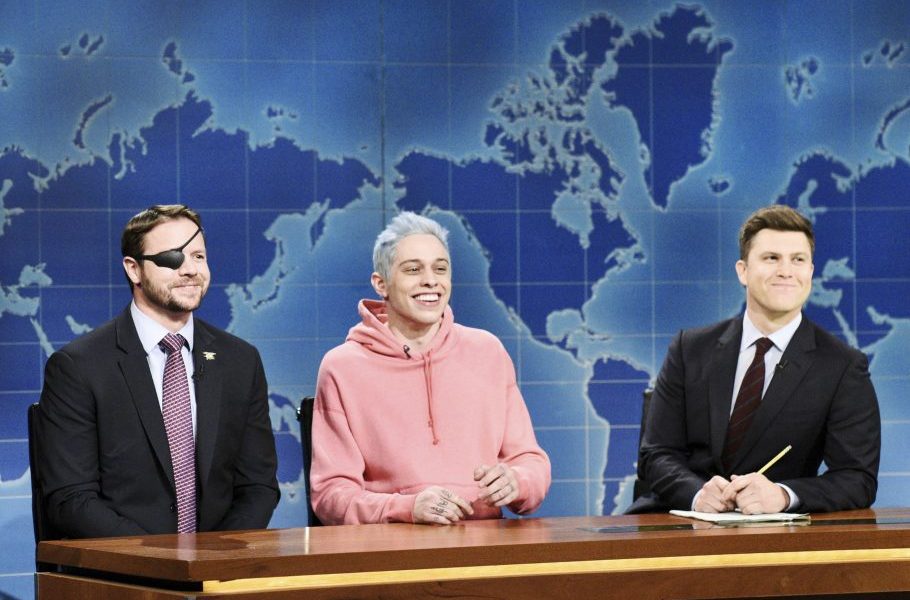 (Photo by: Will Heath/NBC/NBCU Photo Bank via Getty Images)

And finally, it’s time to say goodbye to Kate McKinnon’s half-opossum, half elf former Attorney General Jeff Sessions. She reprised the role for what is likely the final time during the cold open, with Sessions having been fired earlier in the week. A great character, and this Sessions will certainly be missed.