Chris Kattan reveals why he left Celebrity Big Brother - globaltv
Your browser is not fully supported. We do our best to optimize our websites to the most current web browsers. Please try another browser. ×
Back
Posted By: John Powell
|

The comedian wants fans to know he wanted to stay in the competition but the strict rules about outside contact forced his hand.

“Being cut off from the outside world is not easy. People from the outside are not allowed to communicate with you. I had some family issues going on. My stepdad is very sick and I wasn’t able to find out how he was doing. That was hard,” he told GlobalTV.

Although he concedes that the pressure cooker environment was very stressful and his neck, spine did give him problems here and there, he would have stayed to fight on if there weren’t family matters to attend to.

“I had no problem with the house. The house wanted me to stay until the end, for sure. I was hoping maybe I’d be voted out so I can be with my family. It’s a little bit stressful being in there for that long amount of time. Carson Kressley’s cake did help me though,” he joked about his fellow houseguest’s baking skills.

Kattan says production knew all about his past injuries and it was something he had to monitor when involved in the challenges. Kattan severely injured his neck in 2001 during a skit on Saturday Night Live and has had five corrective surgeries to repair the injuries to his neck and spine.

“I’m fine. In order to work on other projects, I’m fine. Riding a reindeer up and down might do something to your neck and was something to look out for but other than that, I was fine to do physical stuff,” he said of the physical demands of Big Brother. 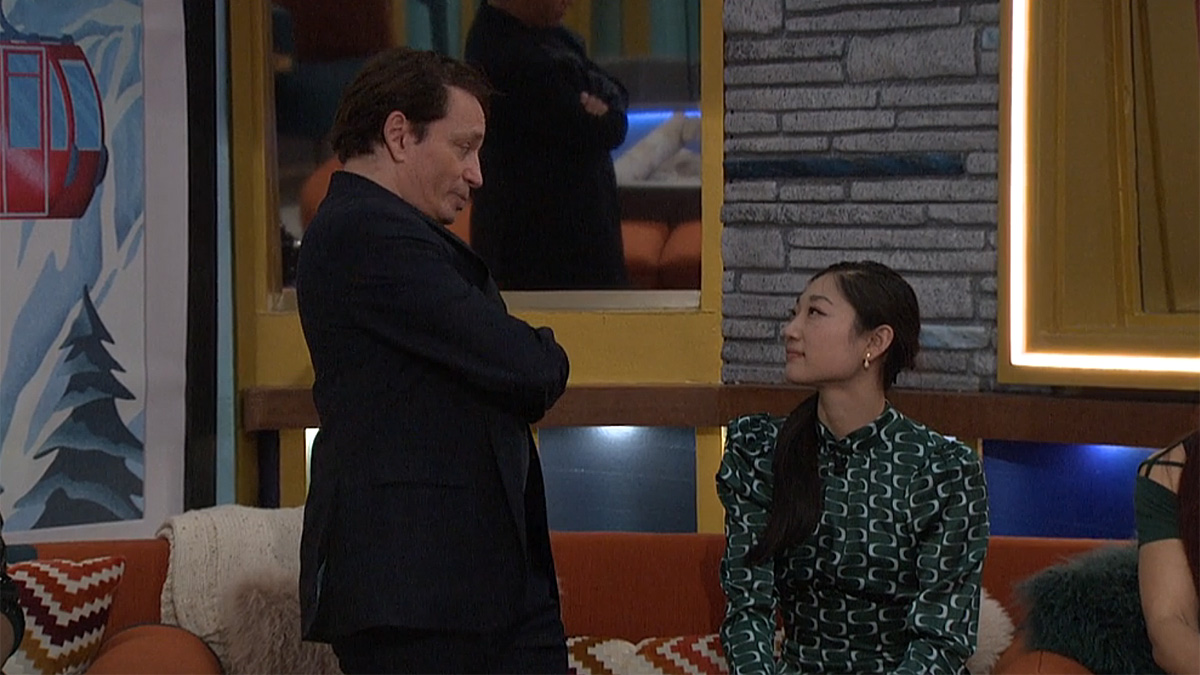 Kattan admits that it was hard for him to grow close to other houseguests on the show, live with them for 24 / 7 and then summarily vote them out. The very cutthroat concept of the show was hard for him to reconcile with. During the first vote, Kattan kept his word and voted for Teddi Mellencamp to stay. He was proud that she texted him thanking him for not going back on his word.

“I’m not the kind of person. I don’t like competition mixed with friendship. We become friends. I do not like being given the opportunity to cut someone’s throat after becoming a friend. I would never betray someone’s word or someone when I’m a friend,” he said. “Teddi texted me when I came out of the house and thanked me for keeping my word and being so loyal. I’m happy to say yeah, I am that type of person. I’m very happy to take that compliment,” he said smiling.

Kattan grew close to Olympian Mirai Nagasu and knew how much the game meant to her. Considering the situation with his family Kattan was glad to sacrifice himself for her game asking his fellow houseguests to vote him out over her. The plea fell on deaf ears though as Mirai was voted out unanimously.

“They really wanted me to stay!” Kattan laughed. “They definitely wanted me to say as we were getting along so well. I get along with everybody. They’re lifelong friends, forever. I want to do a show of some sort together. Lamar (Odom) is such a sweetheart. I want to hang out with him. I’m gonna go see Miesha (Tate) fight in Vegas.”

Kattan revealed that he did watch the other seasons of Celebrity Big Brother before entering the house but didn’t check out the regular edition. Knowing all that he knew going in he was still shocked at how quickly people became close to one another and of all the maneuverings and scheming behind the scenes that he didn’t know about.

“I just didn’t play it like Chris Kirkpatrick. I played a different game. I wasn’t trying to make alliances in order to stay there. I played my own game and that was being me. I never had outside conversations. I just wanted them to see me as a trusting, loyal person as that’s who I am. My heart is my biggest muscle,” he said.

Because he left the game and show Kattan will not be part of the Celebrity Big Brother jury and will not get to vote on the winner. If it was up to him though, he has three people he would give the money to.

“I would vote for who wants it the most and who deserves it the most. The person who worked hardest. My first choice would probably be Miesha. Carson wants it too but I think Carson can have a career outside of the house, beyond Big Brother. I feel like it should be Todrick (Hall), Carson or Miesha,” he said.