Big Brother Spoilers: Massage Drama Erupts - globaltv
Your browser is not fully supported. We do our best to optimize our websites to the most current web browsers. Please try another browser. ×
IN PARTNERSHIP WITH

A houseguest’s unwanted massages and physical interactions are making some of the others feel awkward in the Big Brother house.

Sam, Tommy, Isabella and Kemi had an impromptu meeting about the issue involving Ovi after waking up on the live feeds this morning.

Ovi is the 22-year-old college student from Tennessee.

“We are talking about Ovi’s massages and that’s it,” said Tommy as Kemi entered and sat down in the Boat Room covering for the fact that he and Sam were just talking strategy.

“He has gotten better,” said a hopeful Tommy.

“I don’t get them anymore which makes me wonder if the DR (producers) told him to knock it off,” said Sam about the massages as Isabella came into the room.

“We were just talking about Ovi’s massages,” said Tommy to Isabella catching her up.

“I want to tell Ovi, I just don’t know how to say it. For me, it is just a little awkward to bring up in conversation,” said Isabella.

The group confirmed that none of them have notified the producers just yet. 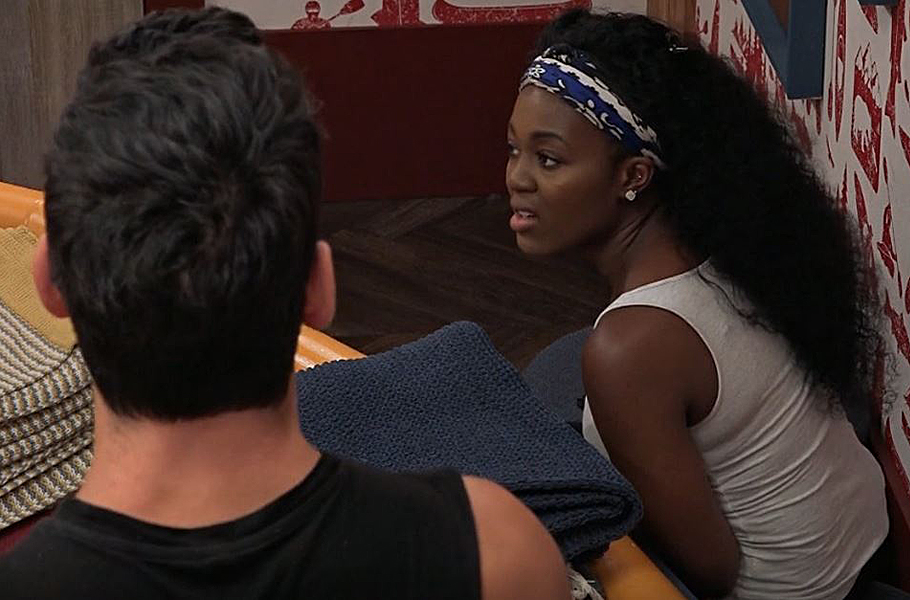 “I feel bad because he has a girlfriend,” said Kemi biting her lip.

“I wonder if on the outside this is just normal for him? I know people like that,” said Tommy guessing that it is just Ovi’s way of fitting in with the group.

“I feel bad. I don’t want to bring it up when it is happening because then it makes it feel more uncomfortable,” said a frustrated Isabella.

“It is like an internal fix as opposed to getting THEM involved. I don’t think we need to go there or we start here and go there if we need to,” said Tommy wanting to handle the problem themselves without Production intervening.

Christie is this week’s HoH. Her nominations and the new Whacktivity Comp will air on Sunday’s broadcast on Global.

Return to Global TV for all of the latest news from the Big Brother house.