Big Brother Spoilers: Live show betrayal leads to live feed fight - globaltv
Your browser is not fully supported. We do our best to optimize our websites to the most current web browsers. Please try another browser. ×
IN PARTNERSHIP WITH

A call out has resulted in a falling out.

Kemi singling out Bella and Nick’s alliance on the live eviction show has erupted into an argument on the live feeds.

“Nick and Bella, you have been running around playing both sides of the house, creating a whole bunch of alliances. The writing is on the BB walls and the walls are closing,” said Kemi to the other houseguests during her speech on the live eviction show.

Kemi’s comment exploded into a full-blown argument on the live feeds.

Since the live feed cameras were not on Kemi and Bella’s fight when it started it is difficult to know what sparked the argument.

“The game I am playing is called being nice to people, talking to people and having nice conversations,” said Bella standing up to face Kemi as the live feeds cameras in the house switched to them. 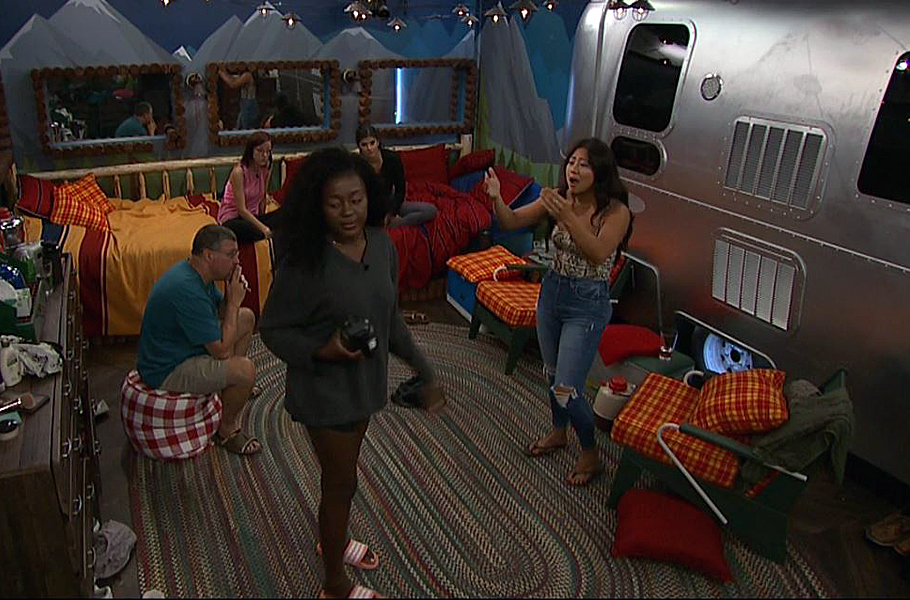 Kemi asked Bella to calm down.

“Personal problems? I am the only one who knows about your personal problems anyway because I am your friend?” yelled Bella as she followed Kemi out of the room.

“Don’t follow me, Bella. It is not that big of a deal,” warned Kemi turning around, walking back and getting into Bella’s face.

Bella stood her ground looking off into the distance. 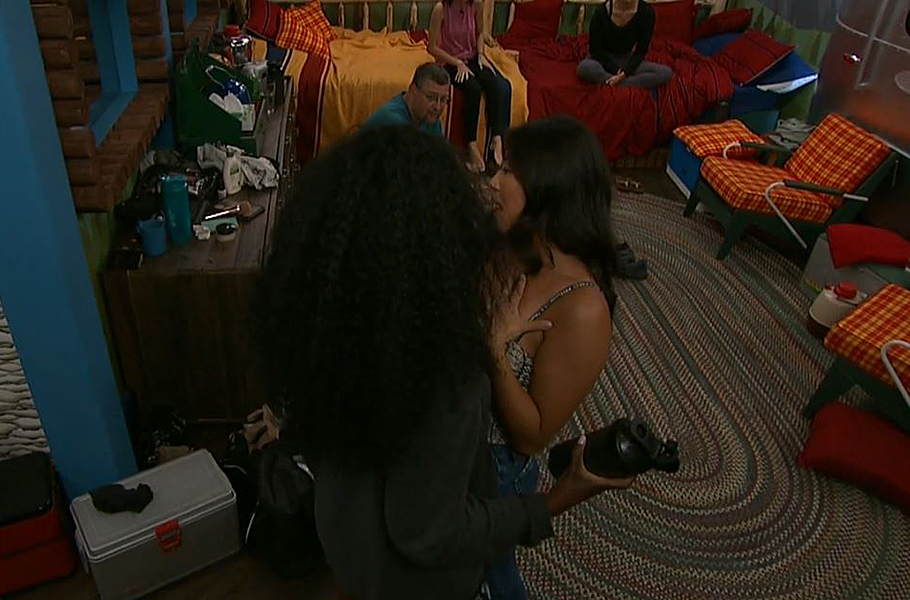 “I am not following you. I am actually going to the kitchen. You don’t need to stand THIS close to me. Goodbye,” said Bella as she grabbed Kemi’s shoulder in an attempt to turn her around. 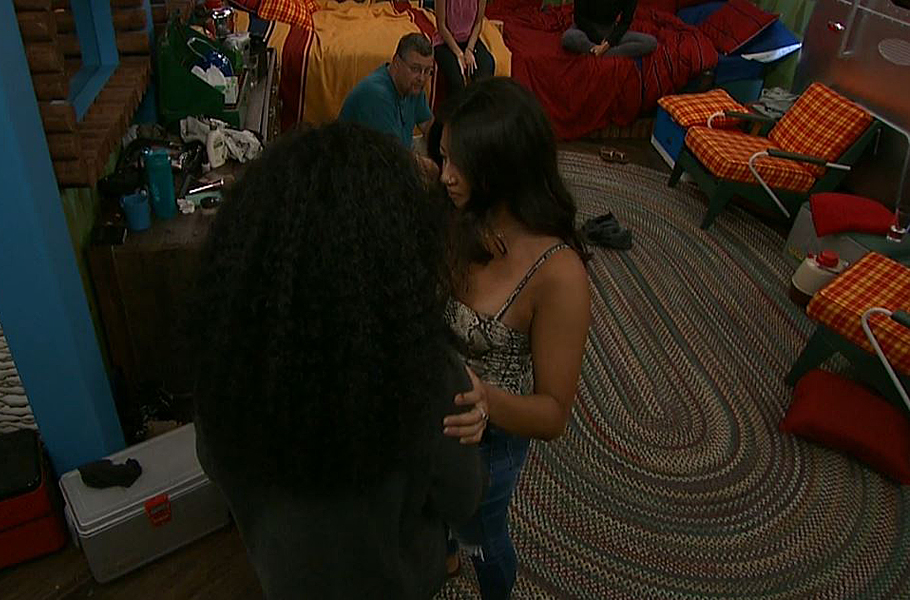 “You are doing a whole bunch of talking behind my back and then when sh-t hits the fan you get mad,” yelled Kemi as she waited for the door to Camp Comeback to be opened.

“Go ahead and talk behind my back in Camp Comeback because all of you and your two friends. Oh, no. Wait. You are FORCED to live there,” snapped Bella. 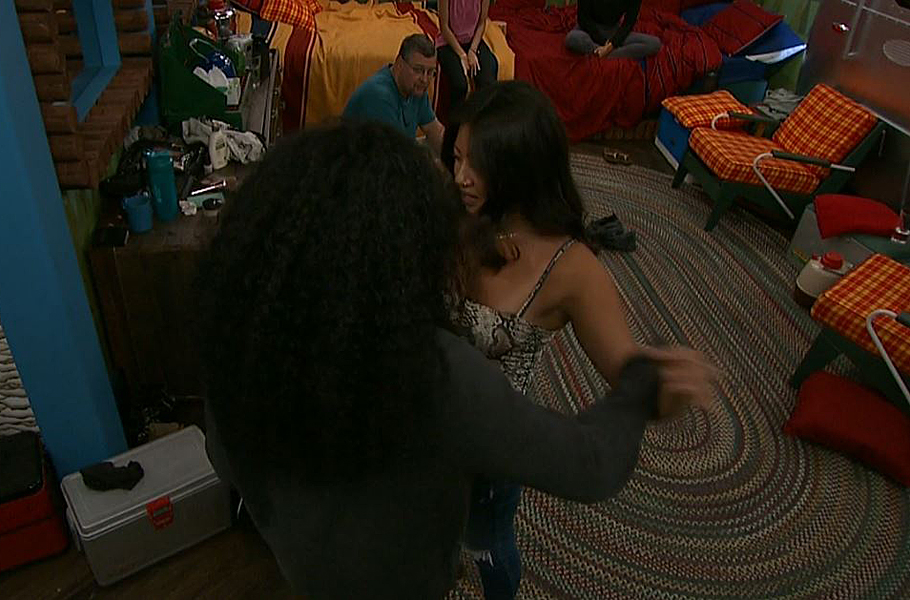 “Anything you had to say you wouldn’t say to my face,” replied Kemi.

“I am just doing whatever the f—k I want to do,” said Bella primping her hair.

“Which is a whole lot of nothing,” Kemi shot back.

Once Kemi had left the room, Bella told Cliff, Sam and Nicole that she now regrets siding with Kemi in the first place.

“I look dumb for being her friend the whole time,” she said.

Later, in the kitchen, Cliff checked on Kemi to make sure she was okay.

“At the end of the day, I said what I said and I meant it,” said an unapologetic Kemi.

Kemi was sent to Camp Comeback on the live show by a vote of 10 to 1. Jackson was the only vote for her to stay.

Nick confided in Tommy on the live feeds that Kemi throwing him under the bus really hurt him since he was the one who waited outside the Diary Room that night when she was so upset.

“I won’t say anything. I do like her. When I calm down, I will talk to her. That was bulls—t. That hurt me on a personal level,” Nick said to Tommy.

On the live eviction show host Julie Chen Moonves announced that the reward of the final Whackivity Competition on this Sunday’s show will be the return of a “classic Big Brother power”. Nick’s nominations for eviction will also air on Sunday. With next Thursday’s eviction the final member of Camp Comeback will be determined. All four Camp Comeback houseguests will then compete to see who wins their way back into the house and which three go home.

Big Brother airs on Global TV Wednesdays and Thursdays at 9et/pt and Sundays at 8et/pt.