Big Brother Spoilers: Enemies bury the hatchet? - globaltv
Your browser is not fully supported. We do our best to optimize our websites to the most current web browsers. Please try another browser. ×
IN PARTNERSHIP WITH

Two of this season’s sworn enemies had a peace conference of sorts today.

Jack and Kemi hashed out their issues in the HoH room with Tommy acting as a mediator between the two opposing parties.

Jack and Kemi have been actively targeting each other since the live feeds began.

Before she headed into the meeting Sam pulled Kemi aside to let her know that he already laid some groundwork with Jack.

“I told him Jess was the head of the snake and he was all about it,” whispered Sam.

“Do your own thing. I set it up like she (Jessica) wants the guys out so maybe you shouldn’t bring that up?” Sam advised.

A delighted Sam went to leave the room.

“I appreciate it,” said Kemi as she hugged him expressing her gratitude for all of his continued support.

Later, Kemi began her meeting with Jack airing some of the confusion about why he believes she is coming after him.

“My conversation with you today is to see where all of this came from last week. I don’t know how we got on opposite sides of each other’s sides so quickly,” she said as she and Jack sat on the HoH bed. Tommy was seated on a chair nearby.

“I heard through the grapevine that you told somebody I told Jackson we were safe because we made food for everyone. That it was a safe play. That I was boasting and bragging about making the food,” Jack revealed.

Jack also heard she was calling him “cocky” and “arrogant”.

“I didn’t know you enough to know if you were cocky,” laughed Kemi.

“You didn’t know me but you made a comment to somebody. That stuck out,” Jack replied.

Tommy jumped in saying that in the early part of the game people look for any reason, no matter how small, to put someone on the block.

“There was no other reason,” said Jack telling Kemi he thinks she is a great person. 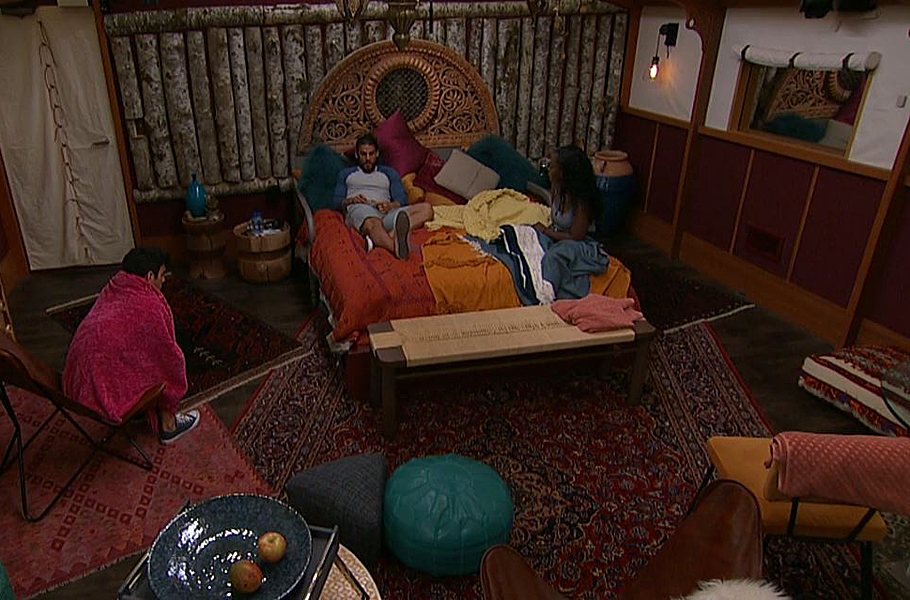 Kemi admitted to still being uncomfortable with the cameras filming her and expressing her thoughts in the Diary Room.

“I didn’t mean anything negative by it. I wouldn’t target someone for making food,” said Kemi about the comment she made.

“I called you Dothraki, seventeen millions times. I didn’t mean anything by it,” she chuckled admitting to the Game of Thrones, Jason Momoa reference.

As the meeting was coming to an end Kemi asked Jack point-blank if he was still targeting her.

Jack answered that both she and Jessica are threats to his game but the decision about who will leave will probably be a last minute one.

“I am glad we cleared the air today,” said Jack.

“Me too,” replied Kemi as she, Jack and Tommy shared a hug.

As HoH, Jack nominated Kemi and Jessica for eviction this week.

Starting today, Big Brother moves to Wednesdays and Thursdays at 9et/pt, with the Sunday broadcast remaining at 8et/pt.