Christmas Returns to Big Brother 19 - Foot Injury Worse Than Expected - globaltv
Your browser is not fully supported. We do our best to optimize our websites to the most current web browsers. Please try another browser. ×
IN PARTNERSHIP WITH

Christmas has come early this year.

After surgery to mend 10 broken bones in her foot, Christmas Abbott is back in the Big Brother 19 house.

On the live feed Friday afternoon, Christmas walked back into the house sporting a new cast and describing her trip to the hospital to the houseguests.

Along with the 10 broken bones, she had four dislocated and had to have a ligament reconstructed.

“He (the surgeon) said it looked like a bomb went off in my foot,” Christmas told the others.

Christmas claims the foot surgery took almost four hours and one of the bones was so broken they had to replace it with a donor bone.

“I have someone else’s bone in my foot,” said Christmas detailing the amount of screws and pins she has in her foot.

She confirmed that she will have to return to the hospital next week to have her foot recast and will not know if she can compete in any of the competitions until they are staged. 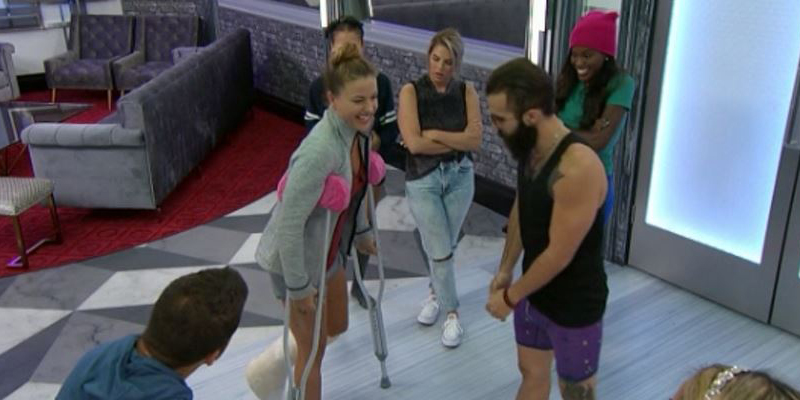 “I am going to totally ask for help because this (foot) had to be elevated as much as possible,” Christmas said explaining she could be in a cast for six weeks and it will take a year to recover.

Some of the houseguests surrounded her as she began to cry.

Before she left for her surgery, Christmas explained that the Producers said none of the competitions would be changed or altered for her and she would not be given any special treatment.