Celebrity Big Brother Spoilers: Confusion, conflict before eviction vote - globaltv
Your browser is not fully supported. We do our best to optimize our websites to the most current web browsers. Please try another browser. ×
IN PARTNERSHIP WITH

Just hours before tonight’s live eviction, Omarosa and Brandi are at each other’s throats.

During the alliance meeting this afternoon, the eviction order was confirmed.

“James goes out and then Chuck and Mark are next,” said Shannon repeating and affirming their hit list.

Brandi began questioning Omarosa about her conversation with Chuck. Omarosa insisted it was just a random chat that meant nothing.

“It wasn’t an attack,” said Brandi.

To Omarosa, characterizing the causal chat as a “huddle-up” was portraying it in a negative light.

“You need to cut it out. You are buggin’ right now,” said an angry Omarosa.

“You are getting defensive right now,” said Brandi.

“That was shady as f—k,” snapped Omarosa. “You are being shady, girl.”

“I saw what I saw and I am just asking,” said Brandi. “I am not being shady.”

“I love you too much to get shady with you,” said Omarosa lightening her tone insisting that they stop debating the issue then proceeded to mock Brandi as “shady boots”.

“You are flipping the conversation because you are the shady one,” Brandi scoffed. “I am true to this alliance, period.”

Brandi acknowledged she is being paranoid but that is because she sees her own alliance members talking with other people.

“Don’t question my integrity is my only request,” asked Omarosa. 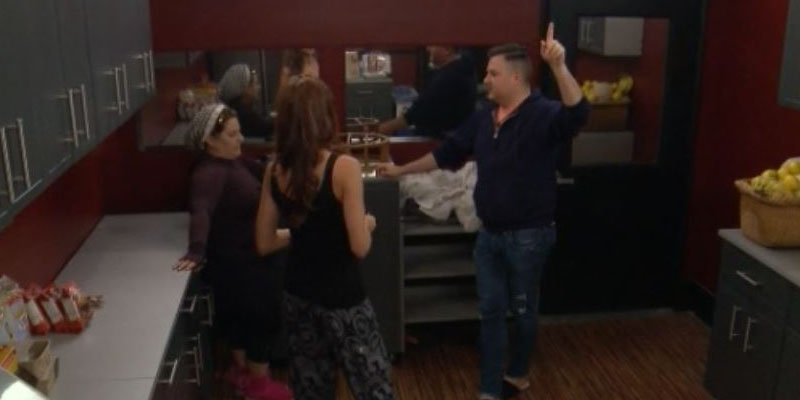 In the storage room later, Ross, Shannon and Marissa huddled.

“That alliance is going to last 30 seconds,” said Ross pointing up to the HoH room.

“Once I said my piece, I am okay with flipping,” said Marissa.

James entered the room and the chat.

Shannon warned James that if the vote does flip tonight and Chuck is sent home, he needs to be low-key and humble.

“You have to act surprised and still talk to the boys. You don’t want anyone to know,” advised Shannon.

Who will be voted out? Will it be Chuck or James? Tune into a special two-hour live eviction episode tonight on Global.