Big Brother Spoilers: Veto meeting inspires one houseguest and angers another - globaltv
Your browser is not fully supported. We do our best to optimize our websites to the most current web browsers. Please try another browser. ×
IN PARTNERSHIP WITH

Tyler has been filled with the Christmas spirit.

HoH Christmas has managed to talk Tyler into staying in the game and fighting on but in turn has angered Bayleigh who was convinced he was going to sacrifice his game for her.

At the Veto Ceremony, Christmas did not use the power to change her own nominations. Either Bayleigh or Da’Vonne will be evicted this Thursday.

“My heart is broken. This is the dumbest s–t I have ever seen in my life,” said Bayleigh crying on the live feeds.

“Can I hug you? No, bitch if you ever come near me again I’ll…” she said about Christmas to Da’Vonne.

The meeting was the end to a roller coaster ride that was the last 24 hours in the Big Brother house during which Tyler wanted to be the replacement nominee and voted out.

Early this morning Da’Vonne tried to find out from Christmas if she was going to use the veto or not.

“What are you thinking?” Da’Vonne whispered to Christmas as they both got ready in the bathroom.

“It is so weird, right?” said Christmas curling her hair.

“I just want to see how Bayleigh reacts. I’ve got to gauge that,” said Christmas.

“So you aren’t going to use it?” Da’Vonne asked about the veto.

“I cannot tell you that,” said Christmas. “You know Nicole adores you. We all want you here so I want to make that very clear. It is just really weird with the Tyler-Bayleigh thing. I am still trying to wrap my head around it completely about everything.”

“Let them battle it out. That’s their problem,” said Da’Vonne.

“It is like a little game between them but it is personal,” said Christmas.

“Let them battle it out. This will force them to talk. They will have to talk,” concluded Da’Vonne.

Da’Vonne then relayed the conversation back to Bayleigh.

“She was like…I cannot tell you. She (Christmas) pisses me off,” said Da’Vonne.

“But that is why I feel she is not going to use it,” said Bayleigh claiming Christmas is a “stickler” for the rules. “This my processing but tell me if I am wrong…because he just wants to go she feels she is cheating the show if she allows him to be on the block. That is what I processed,” said Bayleigh. 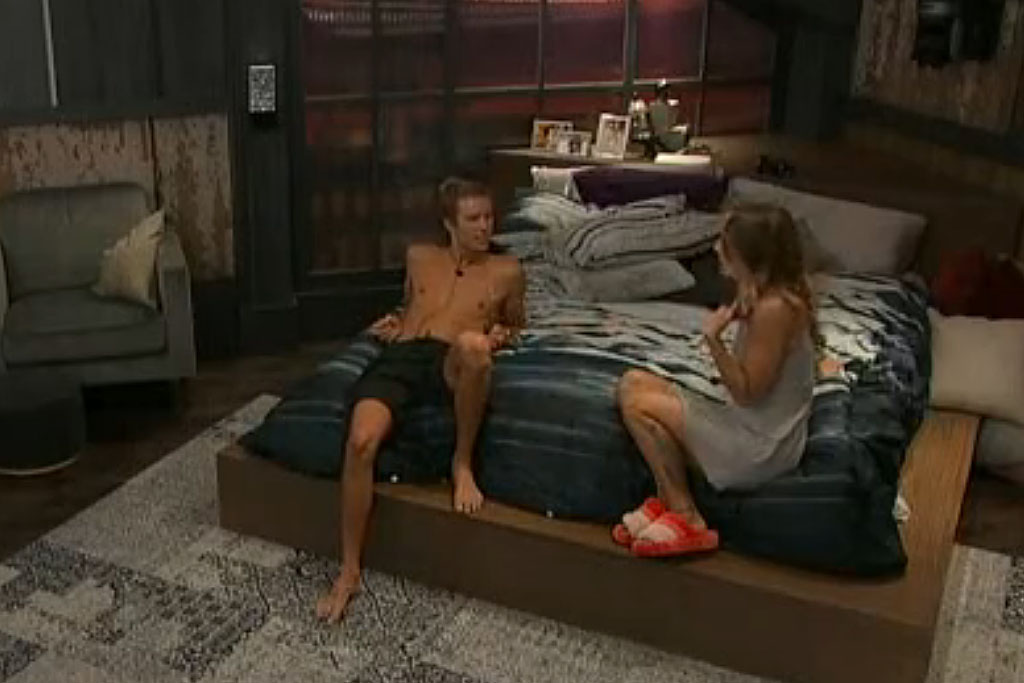 Christmas met with Tyler in the HoH room in an attempt to convince him to stay in the game.

“How did you come to this conclusion to confess?” asked Christmas.

“Listen, you made a commitment to come here. Angela (Rummans) gets you for a whole lifetime. Everyone is happy for her. Two months?” said Christmas trying to boost Tyler’s spirits.

“We are in such a great position. We are almost untouchable right now,” said Christmas. “Unless it is absolutely necessary I am not going to backdoor anyone. That is not my style.”

“We are good though. This is valuable. Now we know what to do next week. What I have to do now,” said Tyler regaining his fighting spirit.