Big Brother Spoilers: Reality show feud impacts nominees - globaltv
Your browser is not fully supported. We do our best to optimize our websites to the most current web browsers. Please try another browser. ×
IN PARTNERSHIP WITH

In looking ahead to the end of this tumultuous week Kaysar reached out to Christmas today to form a new alliance, an alliance that might be strangely familiar. Kaysar and Christmas also discussed one of the reasons why Janelle’s game has suffered this season and how the situation has affected the entire house leading to Kaysar and Janelle’s nominations. Either Kaysar or Janelle will be evicted this week.

“How do you see yourself going forward after this week? You know I am much closer to you than Janelle,” Christmas asked Kaysar.

“I will tell you this. I am a straight-shooter and I am very fair. You do what’s best for your game,” he replied.

“Who is the person in this house that Janelle is totally against?” asked Christmas wondering who Janelle’s allies and enemies are.

“She has had a problem with Nicole (Franzel). That is why they had a blow-up. That is pretty much it,” answered Kaysar referring to a dust-up Nicole and Janelle had after last week’s eviction show which wasn’t seen on the live feeds.

Kaysar revealed the only people he trusts now are Bayleigh, Christmas and Da’Vonne. Kaysar warned Christmas that the core alliance in the house was considering targeting her. It was the reason why Enzo saved her with the Safety Suite. It was to make her think she was never their target when in reality, she was.

Kaysar explained that he had to tone down his game after putting his head on the chopping block to try and save Nicole Anthony last week.

“I don’t want people to think I am Incredible Hulk and aggressive,” laughed Kaysar. 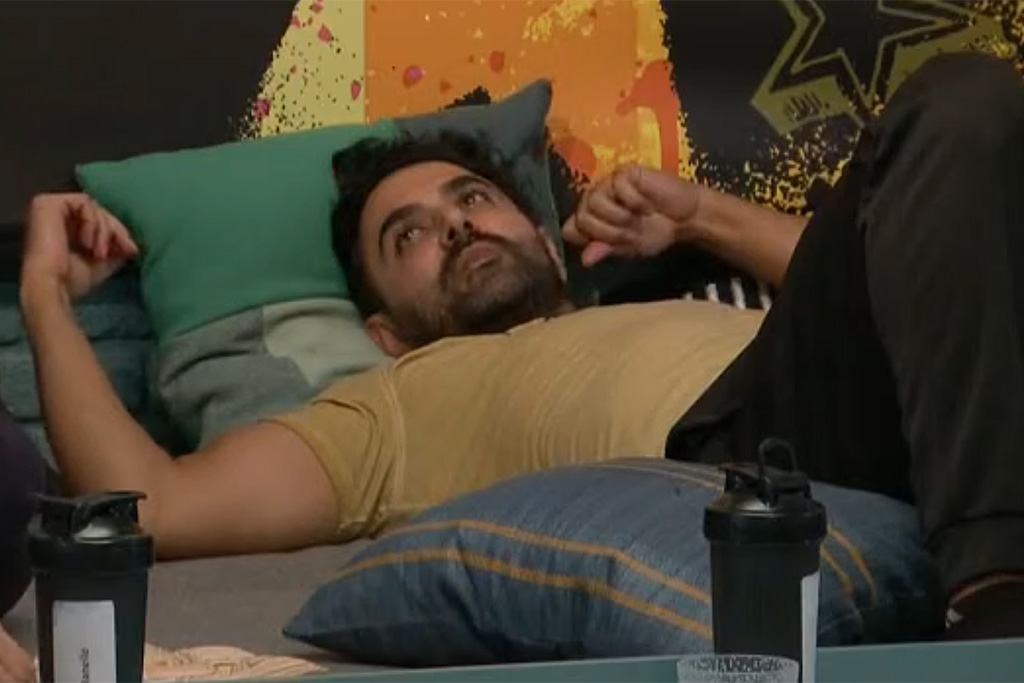 “I can do a thing or two and probably run circles around some people in this house. They know that but doesn’t mean they can do anything about it,” said Kaysar stating he would be an asset to anyone who partnered up with him.

“If I align myself with incredible competitors then everyone has a role and that is a beautiful thing,” he continued.

Kaysar and Christmas then spoke about the biggest factor that hindered Janelle’s and Kaysar’s game. The bad blood which exists between Janelle and Nicole Franzel.

“You aren’t the origin of this conflict. You are guilt by association from what I understand,” Christmas advised Kaysar. “She (Janelle) is the one who has an open conflict with Nicole (Franzel).”

Kaysar explained the situation to Christmas as best he could not having watched the series in question.

“Janelle is just hung up on little things because she is loyal. She is upset with Nicole (Franzel) because she doesn’t like people who float and then at the last minute attack and stab you in the back. That is why she doesn’t like her. She (Nicole) did that during The Amazing Race to Rachel (Reilly). This is the story that I am hearing. She (Janelle) is pissed off about that because Nicole pretended to be nice to Rachel and when it was convenient for her, she stabbed her in the back to get ahead. She doesn’t like that,” said Kaysar detailing how Janelle feels her close friend, Big Brother star and season 13 winner Rachel Reilly, was betrayed by Nicole.

“I don’t know any of that history,” said Christmas.

“That is why she (Janelle) is talking s—t. That is what that is all about,” said Kaysar.

In response to the happenings in the house, Rachel tweeted this about Janelle:

Luv @JanellePierzina she’s an amazing person & also loyal friend who doesn’t gossip about ppl ever- we talk about life/ kids/ work/ how to empower each other and lift each other up-how to help each & she gives me tips on things haha!!!! #Bb22 She’s fun & full of life/kind & real! https://t.co/1VqjZ2itpD