Big Brother Spoilers: Nominations set the game in motion - globaltv
Your browser is not fully supported. We do our best to optimize our websites to the most current web browsers. Please try another browser. ×
IN PARTNERSHIP WITH

After days of pondering and debating HoH Daniel has finally made his nominations.

He has put Michael and Terrance on the block.

Earlier in the day Daniel first explained his thinking to Monte, Joseph and Pooch in the HoH room. Daniel felt backed into a corner because he couldn’t nominate Pooch, Alyssa, Paloma or Brittany due to the Backstage twist.

“There are four people already gone. I hope the Backstage twist will help me but it may not but the nominations are probably first just to put blood on my hands,” said Daniel speculating that the twist will come into play some time after he has made his nominations.

“I think whomever you nominate will put blood on your hands regardless. I think there will be some resentment but it will be less than any other week,” said Monte.

“It is how you sell it and the reason you give. People respect that,” stated Pooch trying to coach Daniel on how to deliver his bad news at the nomination ceremony.

Monte tried to reassure Daniel that he wasn’t on his radar at all.

“I know that if I am safe this week and I win HoH next week I am not looking anywhere near your direction,” he promised. 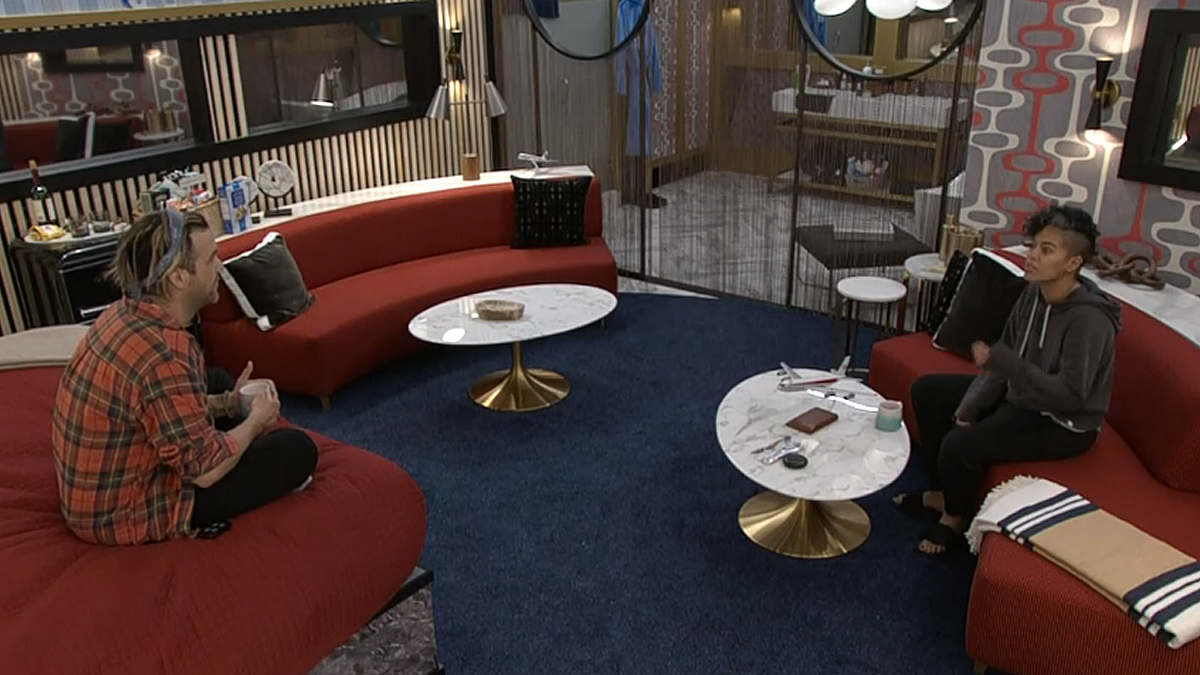 Daniel maintained that he won’t go after a ‘strong male’ this week because he feels he is one himself.

Joseph cautioned Daniel not to pull a Frenchie.

“He was literally like there are muscle guys in this house and they got to get out and he was out the next week,” he laughed.

“Whatever you need from us, let us know,” said Monte.

In his private conversation with his true ‘number one’ Nicole, Daniel was singing a different tune.

“I don’t give a f—k if a strong male goes home,” he said emphatically but then stated to Nicole: “I am not putting them up because they will come after me.”

Daniel laid out his strategy which was to nominate people he thinks they can easily smooth things over with and are “easy to manipulate”.

“My angle is going to be the people who have talked the least amount of game,” he said. “Michael is definitely on my radar. Michael has admitted to me that he is super fan.”

Following the nominations Monte spoke with Michael in one of the bedrooms alone.

“His reasoning surprised me. I did talk to him last night. He was the one who cut the conversation short,” said a bewildered Michael about Daniel’s reasons during the ceremony.

“I hope there is some kind of backdoor plan in place,” he continued.

Paloma came into the room.

“I didn’t expect him to put up Michael at all. It is kind of tripping me out,” Monte said to her.

“I wanted to come up here and tell you we designed this plan to be f—–g bullet proof so I don’t want you to worry for a second because we have your back,” she said to Michael.

Michael and Terrance spoke to Daniel one-on-one about their nominations. Michael was first to let Daniel explain himself.

“Hate me all you want. I get it. I know you are a big fan and I didn’t want to do the backdoor thing. There is nothing else I could do and we signed up for this. The backstage thing f—-d it all up,” said Daniel throwing up his hands.

“If there is anything you can do, if you want me to stay, I would be grateful. My main takeaway is I am not mad,” said Michael.

In their meeting, Daniel admitted to Terrance that it was an emotional nomination ceremony for him.

“I almost lost it when I saw your eyes,” he told Terrance reassuring him that he isn’t his target.

Terrance reminded Daniel of the bond they share as musicians.

“No one understands what we are and what we do,” he said.

Terrance admitted that some of the blame was on his shoulders.

“I should have been more proactive and more social but at times I have felt like I didn’t fit in with the conversations,” he said.