Big Brother Spoilers: Houseguest reveals secret twist - globaltv
Your browser is not fully supported. We do our best to optimize our websites to the most current web browsers. Please try another browser. ×
IN PARTNERSHIP WITH

The secret is out.

On the live feeds this afternoon, Tommy Bracco, the 28-year-old Broadway dancer, revealed he knew houseguest Christie before the show and she also dated his aunt.

Holly, Jackson and Tommy were sitting together talking about how Christie played the game as they waited for the Power of Veto competition to start.

“I thought Christie on Day One was very hot-headed, very domineering but very back and forth and indecisive,” said Holly not mincing her words at all.

When there was a pause in the conversation Tommy dropped his bombshell.

“I want to tell you guys something. I knew Christie before coming into this house. Please keep this between us,” pleaded Tommy as he began to get teary-eyed.

“I am so sorry. I wondered that at points,” said a shocked Holly apologizing profusely to Tommy. 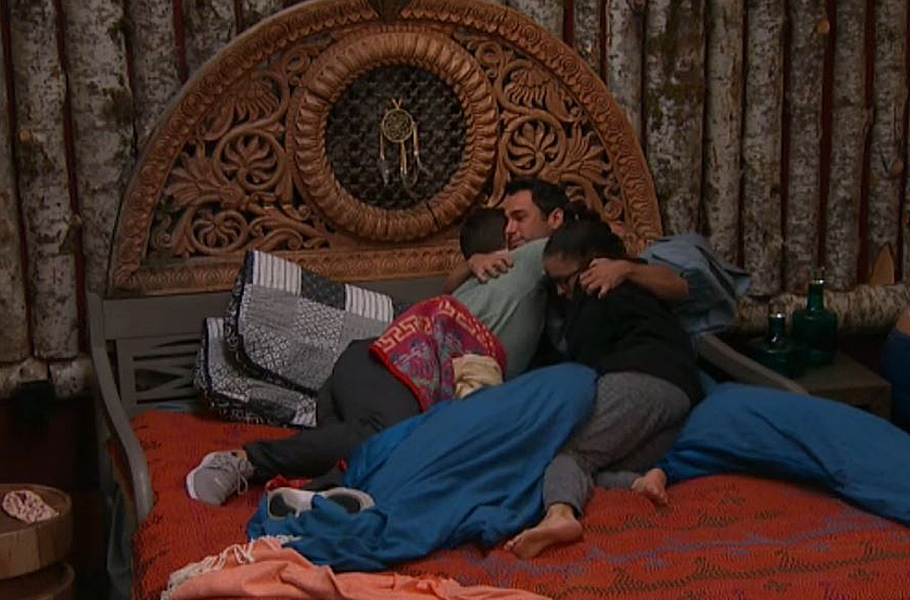 “This is freaky,” said Tommy his voice cracking.

“I am so sorry. I won’t tell anyone,” Holly reassured him.

“Her ex-girlfriend is my aunt,” said Tommy as the live feeds from the house cut away.

When they returned, Tommy explained some more.

“I had to go with it because of who she was,” said Tommy crying.

Jackson and Holly both reached over and hugged him.

The feeds cut away again as Tommy spoke more about his aunt.

Since the start of the season both Tommy and Christie kept the fact that they knew each other prior to entering the Big Brother house from the other houseguests. They were childhood friends who went to school together and later reconnected when Christie began a long-term relationship Tommy’s aunt. The relationship ended badly. In the house, Christie admitted that the break-up was her fault but never revealed the identity of the person, that it was Tommy’s aunt she was speaking about.

Christie told GlobalTV.com she is grateful she got to know Tommy again.

“I could see him and I traveling the world. I can’t wait to do every fun Big Brother event with Tommy. Also, this experience is so unique and just bonds you for life. I love him so much,” she said in an interview after her eviction this week.

As this week’s HoH, Jackson has put Cliff and Tommy on the block. The Power of Veto will be played this evening.