Big Brother Spoilers: House gripped by turmoil before vote - globaltv
Your browser is not fully supported. We do our best to optimize our websites to the most current web browsers. Please try another browser. ×
IN PARTNERSHIP WITH

None of the houseguests are kitten around today. Letting the cat out of the bag has caused a bedlam in the Big Brother house right before tonight’s vote.

Nicole pulled Jessica aside to chat with her in the RV Room.

“I need to tell you something and this could potentially blow up my game horribly but I need you to know because I cannot leave you out on a limb. I have realized you are the only person I trust in this game,” began Nicole.

“The plan is to have a final six: Christie, Tommy, Sis, Nick, Cliff and me. So, they want Kat gone then they want to get rid of Holly, Jackson and then you, which I don’t like. I am panicking because I don’t like it,” she confessed to Jessica, who struggled to contain her anger.

“They are trying to form this six and it doesn’t include you,” said Nicole.

That conversation about the six person alliance set the stage for the strife in the house today.

Holly dished to HoH Tommy about how a furious Jessica was behaving last night.

“I am actually worried that Jess is losing her mind on a personal level,” said Holly.

“She stood by our bed with this crazed look,” explained Holly saying Jessica stood there holding a wine glass, staring at them and then left the room muttering something about an alliance.

The discussion then shifted to Christie and how Holly cannot trust her in the game even though she likes her as a friend.

“She will turn on someone and throw them under the bus in the same freaking breath. If she is willing to do that to me she will do it to anyone,” said Holly.

“I see that too,” said Tommy once again playing mediator.

Getting all fired up, Holly let Tommy know how she really feels.

“Christie doesn’t see us as humans. She is running this game and we are all her little pawns. Whatever she says goes. Everyone is so scared of her. I want to work with her but I want her to see me as a human not a f—–g pawn,” Holly snapped. 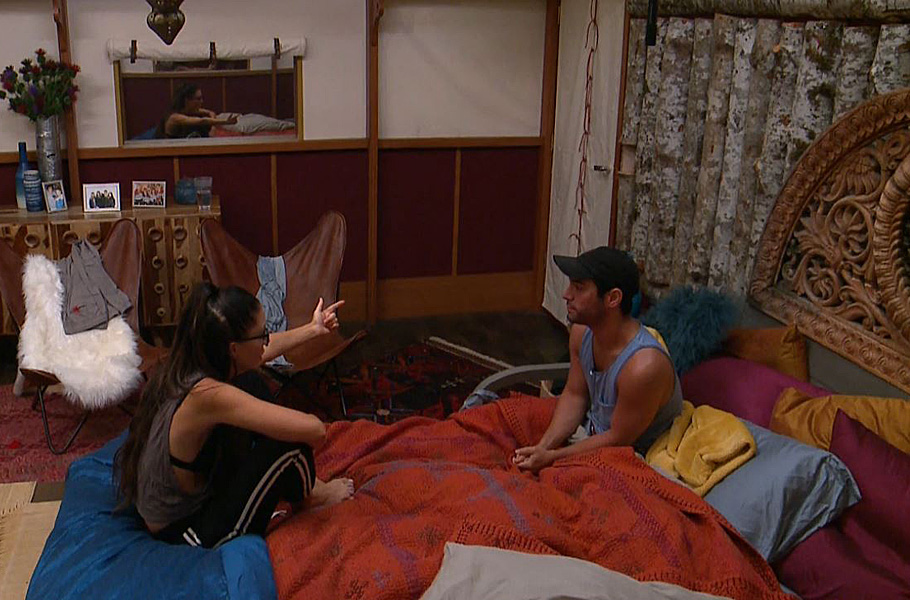 “I totally you hear you,” is all Tommy said in response.

“Every time someone calls her out on her s–t she starts crying. I am so frustrated with her,” Holly continued.

“You are not alone,” replied Tommy.

Jackson and Analyse joined the conversation as it delved into why a six person alliance was being formed against Holly and Jackson. Holly and Jackson believe Kat is being voted out to take away someone who is seen as their only ally.

“It is to disarm us,” laughed Jackson.

“You literally told Jess that last night unless she is completely full of s–t,” Holly said accusing Analyse of plotting against them.

“I would never say disarm you guys,” Analyse answered denying she said anything like that. She has always had their backs and would never betray them.

Tommy attempted to ease the tension.

“Kat was put on the block because she is working with everyone,” he said denying it was a move on his part to indirectly target Holly and Jackson. Some people in the house wanted him to nominate Holly and Jackson but he would never have done so.

“You are my people. I will fight for you as much as I can,” Tommy promised.

Downstairs, Jessica accused Christie of forming an alliance against her.

“Clearly there is a lot of craziness going on in this house,” said Christie dismissing the allegation claiming it is not a formal alliance but just an agreement just in case there was a double eviction coming up.