Big Brother Spoilers: Deal proposed before Veto meeting - globaltv
Your browser is not fully supported. We do our best to optimize our websites to the most current web browsers. Please try another browser. ×
IN PARTNERSHIP WITH

With showmance Jackson and Holly holding all of the power this week, it was up to them to rock the boat or not at today’s meeting. The Veto win was Jackson’s third of the summer.

Jackson decided to leave the nominations the same. Christie or Nick could be joining the jury on Thursday.

“Well, you had a dream we would be in the final two so something has got to happen for that to happen,” joked Nick to Christie in the kitchen when the live feeds returned following the ceremony.

“That was pretty funny. We were literally fighting in the final two,” laughed Christie.

Minutes after the houseguests were awoken by Big Brother this morning Nick tried to cut a deal with Holly and Jackson.

“They (the producers) are going to call me in soon to do a replacement and not to be pushy about that but if you wanted something to happen, I just need to know who you would want up,” said Nick to Jackson in the HoH room.

“I cannot use it. I won’t be able to,” replied Jackson still in bed. 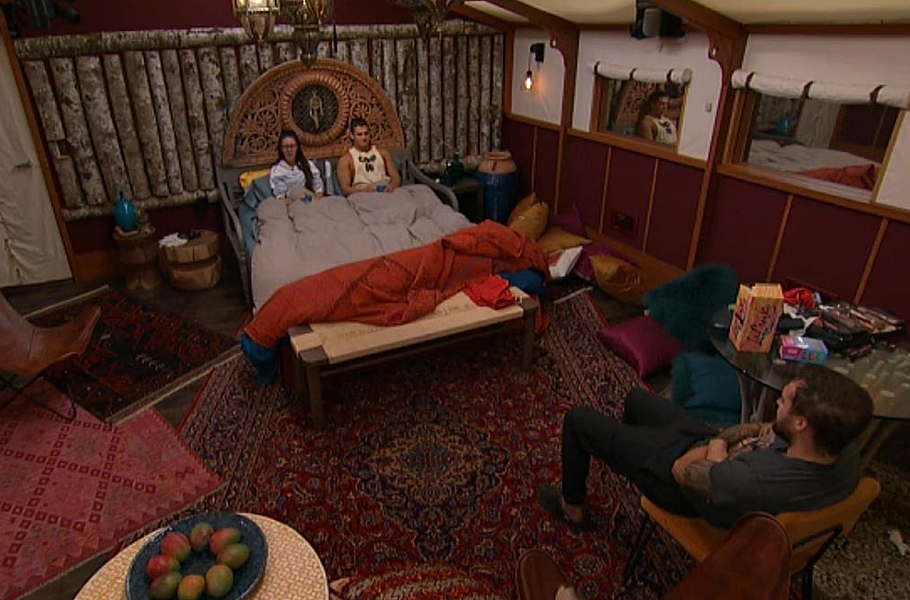 Jackson insisted that unlike previous weeks he doesn’t have the inclination to make any deals. His game would suffer if he did.

“It wouldn’t be best for my game to use it. It is about leaving people in this house and going forward the next few weeks,” he explained.

“I have always had your back. I had your back this week. I didn’t put you up. I don’t know how else to show loyalty to you when my back hasn’t been against the wall when other people are just doing it when their back is against the wall and if they can flip on their best friend and blow up my game to save themselves what are they going to do with the tide changes?” said Nick pleading his case.

“The ripples it would cause would leave me dead in the water,” Jackson said decisively.

“I have to play defensively. You are a strong player and we are down to eight people. I am sorry but I have to take big shots and I am doing that. Christie is a strong player so it makes sense that she is on the block too,” added HoH Holly.