Big Brother Spoilers: An argument, a well-played veto change the game - globaltv
Your browser is not fully supported. We do our best to optimize our websites to the most current web browsers. Please try another browser. ×
IN PARTNERSHIP WITH

Heading into a critical vote that will decide this year’s final four, the Power of Veto and a fight in the Big Brother house might have changed everyone’s strategy for the week.

Nicole used the Power of Veto at the meeting today to alter Jackson’s nominations saving Cliff. Jackson was forced to reluctantly put his showmance Holly on the block.

Either Holly or Tommy will be voted out and join the jury this Thursday.

While the consequences of the meeting were on everyone’s mind so too was last night’s argument between Holly and Jackson while everyone was drinking on the patio. When Cliff mentioned The Challenge, Jackson commented that he would love to go on that show and compete. Holly called the show “trashy” and accused Jackson of wanting to be on the show just to hook up with the women. Throughout the evening, Jackson kept bringing up that sore point with Holly and Holly lashed out at Jackson for doing so.

“It is so scary doing those meetings. Even when you know it is going to happen, it is crazy,” said Tommy to Holly as they relaxed in the hammock after the ceremony today.

“I just went on the block on Jackson’s HoH,” laughed a shocked Holly. 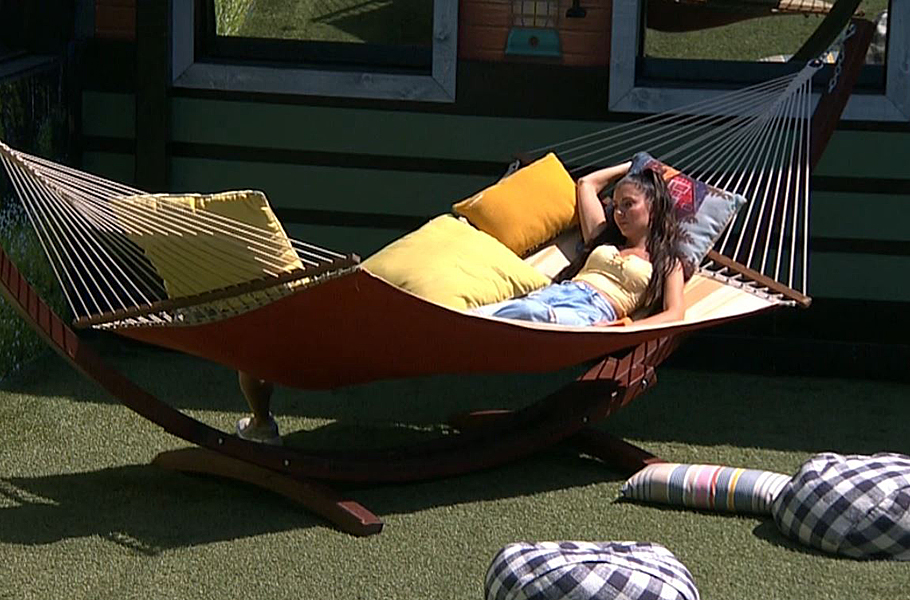 “That is only because there are five people left,” said Tommy.

“I think the house is getting to me,” admitted Holly.

“If I weren’t drinking it wouldn’t have bothered me so much,” said Holly of the argument.

“Alcohol does do that,” replied Tommy.

“He was being pushy too. He was more mouthy than usual. You expressed that it was bugging you and he kept pressing buttons. You cannot take all of the blame,” said Tommy trying to be fair and see both sides.

“I am not good with containing my words when I am mad. I called him a f—–g asshole again. This house is making my fuse even shorter,” she said.

“You didn’t do anything wrong but if you do that, that is wrong,” said Tommy when Holly mentioned taking the blame for the fight.

Minutes later, Tommy and Jackson crossed paths in one of the bedrooms as they got changed to hang out by the pool.

“I think it is because things are coming to an end,” said Tommy about the growing tension between Holly and Jackson.

“It ain’t going to work in real life. I will write it off once for hormones or whatever but twice in a f—–g week? I don’t care if you are frustrated or stressed. You don’t talk to somebody like that. I have a lot of s–t going on in my head too and I don’t call her a f—–g bitch,” answered Jackson.