Big Brother 19 Spoilers: Houseguests Hatch Vicious Plot - globaltv
Your browser is not fully supported. We do our best to optimize our websites to the most current web browsers. Please try another browser. ×
IN PARTNERSHIP WITH

One of the three nominees has been pulled off the block and a nasty plot has been  hatched by some the Big Brother 19 houseguests while others voiced their disapproval.

As the week 5 POV (Power of Veto) winner and HOH (Head of Household), Paul Abrahamian has all the power and elected to use the Veto to save Jason Dent leaving Jessica Graf and Cody Nickson on the block.

Jessica though, has the ‘Halting Hex’ temptation which allows her to cancel eviction night this Thursday (August 3) and save herself and Cody. If she does use it, Paul cannot play in the following HOH competition.

After the Veto meeting, a confrontation between Raven Walton and Jessica had the rest of the house circling their wagons.

Tired of people plotting behind her back, Jessica put Raven on the spot. Jessica walked into a conversation about the Veto medallion but previously Jason, Raven and Kevin Schlehuber were debating Jessica’s next move in the game.

“I don’t know what you were talking about bit it looks really bad. I am just letting you know that was really sketchy,” said Jessica to Raven. Raven asked Jessica to look in her eyes and know she is not lying.

“I looked into your eyes last Thursday and you lied to me,” said Jessica walking out of the room.

When questioned again by Cody and Jessica, Raven once again said they weren’t talking about Jessica at all.

“After everything that has happened, I don’t blame you Jessica for feeling the way you do,” said Raven asking Jessica for a hug.

Next, Jason came into the room to explain his Veto ceremony speech which both Cody and Jessica took as a personal attack. As he was doing so, Alex Ow kept interrupting saying she wanted to speak to Jason alone, that’s all at Paul’s request.

“I would like to see the independent cowboy come out and kick down doors,” said Cody of Jason following Paul.

When Cody and Jessica were alone, Josh Martinez resorted to banging pots and pans downstairs, once again.

”Welcome to Big Brother meatball!” he shouted as the couple remained in one of the bedrooms. When Josh failed to rile them up or obtain any kind of reaction he went back up to the HOH room dejected.

Talking to Josh, Raven and Matt Clines, Paul suggested getting Cody, a former marine, to crack and goad him into being aggressive.

“Jason wants to question his (Cody’s) military background. Why is he taping those dog tags, if he is so proud?” said Paul to Matt. At first, Matt suggested that they need to go all out with that tactic.

“We have to put him (Cody) in such an uncomfortable spot that he leaves or he gets aggressive and he gets kicked out of this house by default,” said Paul. 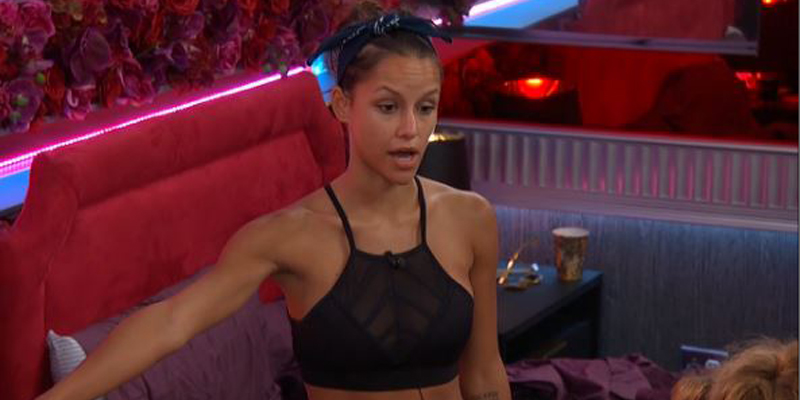 Christmas agreed that mocking and questioning Cody’s military service is what they have to do. She called Cody a bully.

“Now we are putting people in physical danger,” said Matt, who began questioning the plan.

“Cody may have killed people but I can rip souls out!” said an angry Christmas.

“Good TV is good TV but hurting someone is not cool,” said Matt.

Josh once again went after Cody yelling at him from the kitchen.

“Cut the leash, buddy! You remind me of that leash I buy for my dog at Wal-Mart!” yelled Josh.

Cody didn’t respond, he just got up and moved away.

Later while Cody and Jessica were in the hammock in the backyard, Josh and Paul banged pots, insulted them while Alex and Christmas mocked Cody for being an “embarrassment to the military”.